How to lay the cable

Replacing or laying new wiring in an apartment or a private house is a very, very laborious task. Since it has been decided to modernize the electric network, you will have to deal with such tasks as laying the cable. Depending on the installation location of the wiring, the operating conditions of the premises and individual preferences, it must be produced in various ways. What are the laying methods described in this article.

To lay the cable on the floor, wall or ceiling, a corrugation is used. In this case, the wiring can be both hidden and open.

Corrugation is a corrugated pipe made of polyvinyl chloride or metal. Inside, a metal wire is laid, with which you can extend the cable into the pipe. Recently, polyvinyl chloride corrugations are increasingly being used for laying electric cables and wires indoors. This is due to the fact that their weight and price are slightly less than metal.

Corrugated pipes can be used in residential, technical, administrative and industrial premises. The corrugation material serves as an additional insulator for the cable and has the ability to self-extinguish, which significantly reduces the possibility of spontaneous combustion due to short circuit.

Corrugation is suitable for different types of cable of different diameters, as it is produced in several variations with cross sections: 16 mm, 20 mm, 25 mm, 32 mm, 40 mm, 50 mm and 63 mm. Through it, you can stretch both power cables and those related to information networks.

Important! Polyvinyl chloride corrugation can only be used for laying cables indoors. The material from which it is made is sensitive to ultraviolet solar radiation, temperature extremes and high humidity. Although there is a separate corrugation class for laying in open spaces.

It is convenient to fix the corrugation to the wall with the help of clips – clamps, the diameter of which can be selected for the pipe section. This method is often used to lay cable in suspended ceilings and drywall partitions. If you lay the corrugation on the floor under a concrete screed, you need to buy a special – reinforced, able to withstand loads.

Cable laying in a trench

Cable laying in a trench – convenient and practical, but not always possible

In summer cottages and in country houses, it is possible to extend the power cable between buildings and for outdoor lighting by air and underground. The air method is advisable if the distance between the objects is small. The underground method is suitable for laying cables over long distances or outdoor lighting equipment. This method is more aesthetic, since there are no hanging garlands over your head, but it has a number of limitations:

If no contraindications have been identified in your area, you can proceed to lay the cable. First you need to do the markup of the site. The cable should be located no closer than 1 m from the trees, bypassing car parks, platforms for the arrival of the dump truck and other places of increased load on the ground.

A further sequence of steps for laying the cable in the trench looks like this:

1. We dig a trench according to the previously performed marking. The minimum allowable depth is 0.7 m. But for greater convenience, it is better to make 0.8 – 0.9 m.

2. From the trench we remove all kinds of materials and substances that can damage the cable sheath: glass, stones, iron, wire, etc..

5. We check and make sure that there are no short circuits of conductive conductors between each other and with armor using a megger.

Important! Be sure to remove the charge from the cable after checking with a megger. To do this, we connect the veins and armor between ourselves and close all this to the ground. At the same time, we observe safety precautions: we stand on a rubber mat, in rubber boots and gloves, and in the presence of a partner.

6. Protect the cable. To do this, you can use various materials: corrugated plastic pipes, metal corrugation or metal double-walled pipes. The choice depends on the budget and preferences. We pull the cable through the protective material. If you decide to use polyvinyl chloride corrugation, we additionally protect the places of contact with large solid objects and others that could damage the cable with the cases. The case can be made of asbestos-cement pipe by sawing it in half and wearing both halves.

7. We lay the cable at the bottom of the trench. We do this not in a stretch, but in a wave-like fashion so that the cable lies freely.

Important! It is advisable to draw a plan – the layout of the cable in the area, so as not to damage it in the future.

10. We lay the signal tape over the cable.

11. We fill up with soil completely, making a small slide. Once again, check for short circuits. If everything is in order, you can use.

When do you need pipes

Cable routing in a pipe is shown at a high level of fire hazard, humidity and temperature differences

Pipes during installation of electrical wiring are used in rooms with a high level of humidity and a sharp temperature difference. For example, in a bathhouse, basement, unheated buildings. Also, a high fire hazard of the room can serve as an indication for the use of steel pipes. For example, if the house is completely made of wood.

In addition to residential premises, this method of cable laying is used in industrial premises, production halls and other buildings where there are high mechanical loads, corrosive chemicals, vapors and gases, as well as a high possibility of dust and explosive substances entering the wiring.

To lay the cable outside the premises, plastic, asbestos-cement, steel and other pipes are used to protect the wiring from the effects of aggressive soils, stray currents and mechanical damage.

In residential premises, the cable laying in the pipe is made both hidden and open. If it is planned to install it in a gate, the pipe is mounted directly in the gate in a wall or floor, and then plastered. When laying in an open way, the pipes are attached to the walls using brackets or clamps.

Important! In vertically laid pipes, the cable must be drawn from the bottom up.

To connect the pipes to each other, you can use welding, sleeves and cuffs without sealing, if the room is dry. And you can use the couplings on the thread. In turning places, it is advisable to use elbows on the thread. At the same time, in order not to damage the cable when pulling on the sharp edge of the pipe, plastic bushings are laid in such places.

Important! So that condensate does not accumulate on the surface of the pipes, but rolls off them, the pipes are mounted with a slight slope. 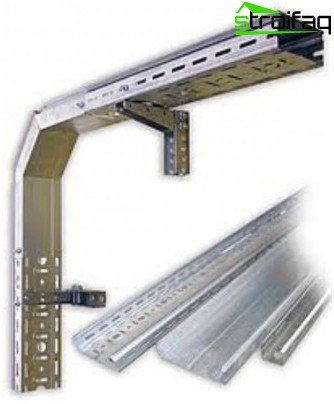 This method of installing the power cable is used in electrical rooms, in the technical floors of buildings, basements, pump rooms, compressor rooms, in the aisles behind switchboards and other technical rooms.

Laying a power cable in open type trays has several advantages with respect to laying in pipes:

Trays are fixed at a height of at least 2 m from the floor. Mounted on brackets and suspensions. Connections are made by threaded elements..

There are situations when the finishing of the room has already been done, and suddenly there was a need to do cabling in the apartment. Or, for example, the house is completely made of wood, how to lay the cable in this case? A good way out is laying the cable in the cable channel. Its second name is the electrical box. This method is considered open..

Most often, the cable – channel is made in white, but if you set a goal, you can find various shades of wood. Thus, the box will practically not visually stand out on a wooden wall. The material used is: plastic, steel or aluminum.

Cable installation is reduced to such works:

Important! The cable – channel is laid in segments of 2 m. If the total length of the wiring is large, for temporary fastening of the cable at some intervals, you can install temporary fasteners in the form of pieces of a cover.

Skirting board with cable – channel – a convenient option for laying the cable Internet, telephony or other

In the same way, the cable is laid in the baseboard with the cable channel. Through it, you can extend the wires of telephony, the Internet, computer and antenna cables.

Cable duct consists of manholes, pipes and devices for installation. A special organization is hired to lay the cable in an existing sewage system or to create a new one, and the necessary permits are obtained.

This method is considered the most reliable in the city. It guarantees that the cable will not be damaged by earthwork and will be protected from negative external influences. In this case, it is necessary to use a special cable for underground installation.

Each of the above methods of cable laying is good at its installation stage in certain starting conditions. Remember, before choosing a particular method and starting laying the cable, you should consult a specialist. Perhaps he will recommend a specific type of cable that will suit your situation, or suggest a completely different way of laying.