All about ceiling lighting

Ceiling lighting miraculously transforms any room. Properly selected fixtures and expertly mounted ceiling lighting in the apartment create coziness and contribute to saving the family budget. In the modern wealth of chandeliers, consumers are not always able to navigate on their own. This article will help you choose the most successful lighting fixtures for the ceiling..

A typical cable cross-section is 1.5 millimeters square, making up a maximum load of 4 kilowatts. Of course, lighting in the house is unlikely to reach this parameter, because in such a situation it is necessary to use 40 bulbs of 100 watts at a time. However, you never need to promise, perhaps jupiters will be installed for professional video shooting at home.

When you don’t want to give extra money for a wire, you can calculate what section the cable will be needed in each case. If the lighting zone consists of three lamps with 60 W bulbs, the total power of the lamps will reach 180 W. It needs to be divided by 220. Now we will consider what the result can tell us about.

It is better to put separate boxes on the ceiling lighting, so that there is less confusion and looks neater. The entry of wires into the apartment takes place under the floor, and in the house appears next to the door. The cable from it passes to the shield. Near the shield there will be the first box, the task of which is to transmit current to other boxes and distribute the unit to illuminate the hallway and kitchen.

Block diagram of the lighting: the input and wiring usually passes under the ceiling

The second box is located above the entrance to a large room in the corridor, from which a chandelier works in the hall and is transmitted to the bathrooms voltage. The third box is needed for servicing the bathroom, pantry and small corridor, as well as for transmitting voltage to the remaining rooms. In the nursery there is a fourth box, serves a switch and supplies voltage to the bedroom. The box in the bedroom is only needed for servicing the switch and the chandelier. The remaining toilet and bathroom are powered by the sixth box.

Switches of any type are always placed on the phase wire. Only one cable is suitable for the switch, which opens and closes inside the switch. From the side it may seem that there are two wires. However, the phase conductor forms a loop that rises or falls to the switch. The loop is cut at the top, and the ends are connected to the contacts of the dimmer or switch.

If you install a dimmer as a switch, then you should look at its power. If the designation is 300 watts, then it is designed for a chandelier, which consists of five bulbs, each of 60 watts. There are 1000 watts dimmers for home use. With the help of such a dimmer, the lighting level can be changed in several rooms at once. The dimmer is set in the same way as a simple switch, only on the contacts of the dimmer there is an inscription which wire to connect to which contact.

The choice of lighting devices

Each lamp consists of an electric bulb and valves, which is necessary for the conclusion of the bulb, its connection and lighting. How to make the lighting of suspended ceilings – a photo selection of lamps will help you figure it out!

Lamps, the fixtures of which are fixed directly to the ceiling itself, are called ceiling. Such devices are used to create a general design for lighting the ceiling of a room. Ceiling light sources are suspended, near-surface and built-in.

The multi-lamp ceiling chandelier is traditionally located in the center of the room, evenly distributing the flow of light throughout the room

Pendant lights are placed at a certain distance from the ceiling. They are best suited for tall rooms. These include suspensions, multi-tube chandeliers, lampshades and other devices. Near-surface light sources are directly fixed to the ceiling. They include various kinds of ceiling shades, which differ in compact size. They are especially good for small rooms like a corridor or a bathroom..

The near-surface ceiling lamp is most often installed in small rooms that do not require bright lighting.

Lighting of false ceilings and stretch paintings is traditionally carried out using built-in lamps. They can be installed anywhere in the room to create the most spectacular lighting in the home..

The popularity of spots is also growing – metal structures with halogen lamps that can rotate to the sides. The spot is distinguished by ease of attachment and the ability to direct the light flux at will.

Spotlights, which can be installed in cornices, suspended ceilings and inside furniture, are gaining popularity. Mostly, spotlights on ceilings are used to focus on local surface lighting. Nowadays, to single out one kind of lamp that would be considered more popular than the rest, because they all have their own advantages that make them attractive to citizens.

After the installation of the lighting of the suspended ceiling is done, and the switches and dimmers are installed, it is possible to fix the lamps to the surface. For the fixture of spotlights, you need to cut a round hole in drywall using a crown with a changing blade diameter, after which the bulb is simply inserted inside. In this case, the spring paws must be held with your fingers, pressing them to the body.

When the lamp enters a sufficient depth in the canvas, the paws will press the lamp to the place. First you need to connect the cable to the contacts. Most often used in everyday life are spotlights marked R80, R63, R50 and R39. The numbers indicate the size of the bulbs corresponding to the diameter of the hole in millimeters.

You can change your home beyond recognition by shifting the emphasis in space. An effective solution is lighting the ceiling of gypsum board using LED backlighting, which differs by the effect of “muffling” to set the brightness depending on the mood of the residents and time of day. If a led strip if you need to cut, it is worth remembering that the cut is performed in specially designated places. If done incorrectly, then soldering back the tape will be quite difficult. To achieve uniform ceiling lighting, you need to fix the LED strip to the ceiling well. 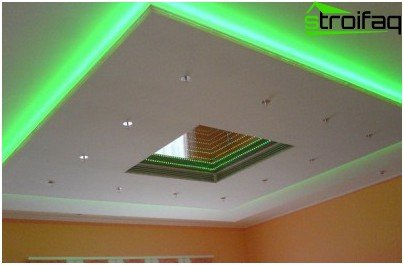 An ordinary chandelier is attached in two ways: they are hung on a hook or screwed with screws or dowels, nails. On the plate that is located inside the decorative bowl, which closes the junction, there are holes. If the chandelier is placed on a hook, then special dowels should be used, which instead of a regular screw have a hook. When you need to install a massive chandelier, then use a metal anchor, which has a diameter of about 8-10 millimeters and can withstand a load of up to 80 kilograms.

Lighting of the apartment is local, general and combined. By combining different types of fixtures, you can create areas with soft or intense uniform lighting. To verify this, enter in the search engine “stretch ceilings lighting” and analyze the proposed options.

Most often, lighting a room is a combination of several options

In the nurseries and bedrooms, it is recommended to install lamps with a stream of light directed upwards to create soft lighting for the entire room. With general lighting, you need to evenly illuminate the entire room with the most powerful and energy-intensive fixtures suspended in the center of the ceiling. In plafonds of general light, you can use one lamp with high power – up to 200 watts or several that have a total power of up to 300 watts. As a rule, multi-lamp fixtures have two categories of lamps that are switched on independently.

Lighting the ceiling in the kitchen requires the creation of several groups, depending on how the ceiling design is executed. Usually this is the area above the table, above the work surface and the lighting of the central part of the kitchen. Lighting devices are also customary to be built into cabinet furniture.

The hallway or corridor usually has a small area, so the lighting here should not hurt your eyes and be excessively bright, but you should not create twilight either. Use best led ceiling lighting and wall mounted lights. If a decision is made to use the luminaire in one copy, then it should emit light well.

Thus, not so long ago it was believed that the lighting of ceilings can be provided only with the help of a chandelier and a wall lamp. However, thanks to new technologies, other solutions have appeared. In the future, it will be possible that diffused light will almost completely displace sconces and ceiling lights..