Without electrical household appliances, the modern comfort of our homes is already inconceivable, but they can also become a source of danger for housing in case of fires and for our health and even life in cases of electric shock. Impartial statistics state that the cause of every third fire is a fire in the electrical wiring, which can occur due to its overload, the appearance of a spark during a short circuit, as well as damage to the insulation or poor-quality wiring. To improve the safety of residential premises and people from electric shock and fires, protective devices ouzo have been used for some time: their connection scheme can cover the entire apartment or serve only one line. If the connection is narrowly made according to the first option, then in the event of an accident at any point in the wiring, the entire house is disconnected from the power supply, and in the second option, the power is turned off only for the failed appliance.

Purpose of installation and tasks of the residual current device

Before considering the types of narrow – the principle of operation and features of use, it should be understood that the residual current device is only an additional device, but not a panacea for any emergency situations not related to current leakage.

The ouzo installation significantly increases the safety level of electrical appliances, but does not completely exclude the possibility of fire or electric shock if a short circuit occurs between the neutral and the phases to which it does not respond.

The device will also not work, even if the person is energized, while simultaneously touching the phase and zero conductors with a finger. There are no differences between the flow of current through the wires under load and through the human body, and therefore it is impossible to create protective devices against such touches. In this case, traditional protective measures remain effective: turning off the device before servicing, non-conductive covers, insulation.

The Uzo residual current device is an additional protective device that does not replace fuses for overcurrent protection.

The Uzo residual current device is an additional protective device that does not replace fuses for protection against overcurrents. Uzo only responds to malfunctions that are not related to current leakage, for example, during a short circuit. Therefore, the installation of the ouzo should only be carried out together with fuses – circuit breakers.

To prevent emergency situations in electrical appliances, fires and electric shock to people, special protective devices are installed in the power supply circuits of buildings for any purpose, which can conditionally be divided into the following types:

Combined protective devices UZO-D, or differential automata, are equipped with an indication that quickly determines the cause of the device’s operation – overcurrents or differential currents. Both UZO and UZO-D perform the same protective functions listed below, but UZO-D is a more modern and advanced device:

The rules of electrical installations also regulate the characteristics of the narrower ones to be installed in household single-phase current networks with a voltage of 220 volts, namely, the cut-off current should not be more than 30 mA, and the response time should not exceed 40 ms (milliseconds) – these values ​​are indicated on the label of the device. Some manufacturers also produce more sensitive ouzo with cut-off currents of 10-30 mA for use in rooms with increased emergency and fire hazard. At the same time, there are UZO devices having cutoff currents of 100-300 mA or more, intended for use in large areas, for example, in production rooms and computer centers. Low-sensitivity RCDs perform only the task of fire protection, but are not able to effectively protect a person from electric shock. A low threshold for the sensitivity of RCD devices in this case could lead to frequent false blackouts.

When installing residual current circuit breakers in residential premises, the following marking of the sensitivity of devices should be followed:

On group circuits, in order to avoid false positives, an RCD of 30 mA is installed. For single consumers, a washing machine or a stove, an RCD of 10 mA should be installed. For appliances installed in rooms with very high humidity, the installation of individual ouzo with a cut-off current of 10 mA is mandatory!

Any RCD is designed to connect a certain load to the network and the maximum amperage is indicated on the label of the device. When connecting a residual current circuit breaker at the same time as a fuse, it is necessary to select ouzo with a higher amperage than that of an automatic fuse.

The principle of operation, functions

RCD residual current circuit breakers record breakdowns of the insulation of the wiring or electrical equipment, comparing the parameters of the electric current at the input to the network and at the output from it. If these parameters do not coincide, the network is disconnected from the power supply and the function of protecting a person from electric shock is performed in case of possible contact with an uninsulated section of the wiring and prevention of ignition.

In accordance with the rules, RCDs are selected according to sensitivity (10-30 mA) and rated current, which is determined depending on the total power of all electrical appliances. Since the rated current is much lower than the corresponding indicator of the AB circuit breaker, RCDs cannot protect against short circuit or overcurrent.

There is only one option, how to connect the ouzo when it comes to a reliable stationary device: immediately after the meter, since it should protect all the wiring in the house. When installing an RCD in the house electrical supply circuit, the following rules must be observed:

Scheme of connecting an RCD to several independent lines

Of course, a more economical way to connect a protective device to the circuit is to install one device throughout the house. But in this case, in the event of a current leak at one point in the circuit, the RCD will disconnect all power to the building.

Much more convenient, albeit more expensive, is another way in which residual current circuit breakers are installed on separate lines: for a bedroom, kitchen, bathroom, nursery, etc. With this scheme, in case of an accident on one of the lines, the house will not be left without electricity.

True, not in every case it is possible to install more than one RCD on the switchboard, and if the house and wiring in it are too old, the device can also create problems in the form of frequent false power outages.

If for some reason you do not want or it is not advisable to install a stationary protective device, you can outlets with built-in RCDs or equip electrical appliances with the same plugs. Moreover, narrow-sockets can be installed permanently in place of old ones or stuck into existing ones like an adapter.

It should be noted that saving on narrow sockets and narrow plugs will not succeed: their cost is almost three times higher than the price of conventional RCDs intended for connection to a distribution board.

Errors when connecting an RCD

Often, when connecting protective shutdown devices on their own during the repair or construction of their housing, homeowners make the same mistakes. The following diagrams of incorrect connection of protective devices to the circuit will allow everyone to avoid annoying errors, thereby increasing the security of their home’s power supply.

When two RCDs are connected to the power circuit, their neutral conductors are confused 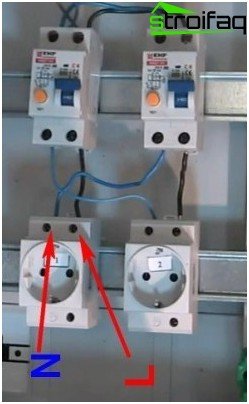 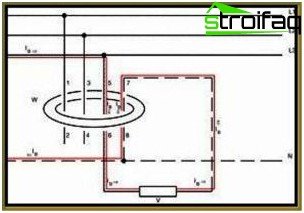 Error connecting the neutral wire to the device

It is not allowed to install UZO devices on the lines supplying the fire or other alarm systems. Surge arresters, or lightning arresters, are installed in private houses in front of an RCD.

Rules for the safe operation of electricians

With a huge amount of consumer electronics, electrical appliances and computers in every modern house, a very high load is placed on the electrical networks, and therefore the installation of protective power off devices in them is vital. No matter how expensive modern protective devices are, it is not worth saving on them, because the cost of devices and especially the price of human life are incommensurable with these necessary costs.