All about repair ceilings

We met with stretch ceilings relatively recently, but they managed to win our sympathies and become one of the most popular options for interior design. And this is not surprising, given their indisputable advantages: moisture resistant, easy and quick to install, and their decorative potential is generally unlimited. But elegant French ceilings are not free from flaws: they are too sensitive to sharp objects and temperature changes, and they can also suddenly sag for various reasons. In this article we will consider in which cases repair of stretch ceilings is possible, and when they will have to be replaced completely or partially.

Causes and types of damage

Structurally, a suspended ceiling is a type of suspended ceiling, which is a polyvinyl chloride or fabric film fixed to a metal frame. Since there is a gap of a few centimeters between a sufficiently thin film and an interfloor overlap, the surface is vulnerable to mechanical influences both outside and inside. In some cases, the defects are minor and you can even do the repair of the stretch ceiling with your own hands, but sometimes only a specialist can assess the true scale of the disaster and suggest a repair method that is optimal from a financial and aesthetic point of view.

The most common reasons when a stretch ceiling needs repairs:

Types and methods of repair measures

Let us consider in detail each of the listed cases of damage and solutions to the problem..

Puncture, tearing or cutting of the stretch ceiling canvas most often occurs in the first days after installation, when it is still too tight, and the owners are not yet used to carefully handling a new element of their interior. The cause of the defect can be a toy thrown by children with sharp parts, a corner of the cabinet to be set that touches the ceiling, and careless handling of tools when installing fixtures.

If a hole with a diameter of not more than 1 mm is formed in the ceiling as a result of a puncture with a sharp object, you can even handle it yourself with glue and the canvas will not creep away, and the puncture point will be almost invisible.

Repairing a cut of a stretch ceiling is not complicated if it is made of a seamless cloth on a fabric basis, and the damage length does not exceed 5-10 cm. In this case, it is necessary to immediately fix the edges of the formed gap with masking or double-sided tape so that it does not creep out.

Cut, the edges of which can be fixed with construction tape

If the ceiling of the PVC film is damaged, it is also necessary to very quickly fix the place of rupture or cut with adhesive tape, but for its further restoration it is better to invite specialists. Depending on the extent of the defect, it can be eliminated or at least masked in one of the following ways:

Make a thin seam with nylon thread at the cut site. Despite the fact that the technology allows you to make very thin and neat seams on cuts, they are almost invisible only on dull ceilings, but on glossy ones you still need to mask them with any functional or decorative elements.

If the canvas is damaged at a distance of 10-15 cm from the edge of the ceiling, the damaged part is carefully cut, a harpoon is glued to the film, the canvas is heated, stretched and refilled in profile. 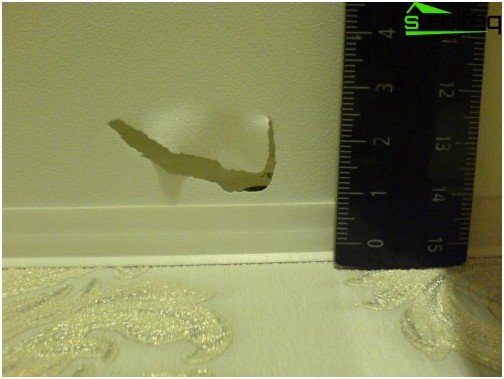 A small gap in the stretch ceiling canvas near the wall, which can be trimmed

This method leaves no traces, but if the damage length exceeds 5 cm, then most likely you will need to install an additional lamp or other imitating element.

If the defect is small in size, but located far from the edge, then it is masked with an additional lamp, false ventilation grille, fire alarm sensor or any decorative element.

Elimination of traces of fusion and burning

Another common reason for the appearance of holes on the canvas of a stretch ceiling is burning or melting. Such an important property of stretch ceilings as fire safety means that the material does not burn, but under the influence of high temperatures with improperly installed lamps or sparks and an open flame from fireworks or sparklers, it melts and can burst.

In places of installation of fixtures, the ceiling can be melted if lamps with a power higher than 40W are used for lighting or powerful chandelier lamps are located closer than 10 cm from the canvas. This contradicts the operating conditions of suspended ceilings declared by manufacturers. If the hole is too stretched, then a ring of a larger diameter made of heat-resistant plastic is installed on the edges melted around the lamp. 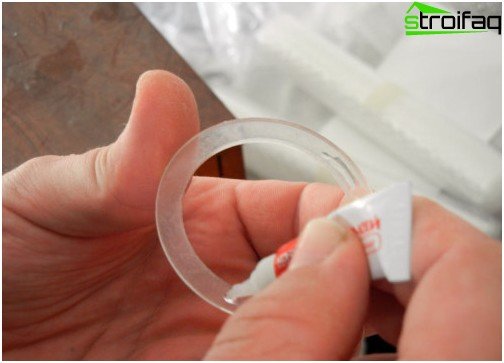 In all other cases, as with cuts and ruptures longer than 15-20 cm, damage cannot be repaired and the ceiling covering will have to be replaced by pulling it onto existing fixtures.

Repair of suspended ceilings during flooding

The ingress of a large amount of water on the canvas of the suspended ceiling during flooding is the leader in the list of causes leading to its repair. On the one hand, the stretch ceiling is able to hold about 100 liters of water and thereby protect expensive furniture and parquet from its harmful effects, but it itself needs to be repaired, and in some cases replaced.

Whether the stretch ceiling is subject to restoration after flooding and what kind of repair to be done depends on the type of canvas and the temperature of the water. The fabric-based canvas is especially sensitive to moisture and after drying it will most likely have to be replaced, as spots may remain on it. The ceilings from the PVC film from the cold water will practically not suffer, but from the boiling water they can stretch very much until the gap.

Stretch ceiling during flooding before repair: the fabric often has to be changed, PVC will recover after heating with a gun

In any case, during flooding, it is necessary to quickly but gently drain the water accumulated between the film and the ceiling. First of all, you need to use the existing holes around the built-in elements – lamps, lamps, hoods. If such openings are absent or insufficient to remove the entire amount of water, it is necessary to dismantle part of the ceiling structure in the corner or near the wall yourself or with the help of a specialist.

After the complete withdrawal of cold water and thorough drying using a heat gun or other heating device, the material will again take its previous shape and will not lose its properties.

Stretch ceiling during flooding after repair

If the water temperature is above 70 ° C, even the film cloth of the ceiling coating can stretch too much and can no longer be restored. It will have to be replaced using the existing mounting system..

What to do if the canvas sags

Sagging of the canvas is a fairly common defect in stretch ceilings, which can be caused by various reasons:

After flooding, only the web is dragged, the frame needs to be repaired and replaced

If there is no damage to the canvas and it does not need additional repair, then in any of these cases it is necessary to invite professionals who will haul it or replace it if necessary.

The cause of the rupture of the stretch ceiling web along the seam can be:

If the web breaks along the seam, it can only be replaced and, best of all, with seamless stretch ceilings. Given that each of the listed causes of this defect relates to installation defects, the company that installed the ceiling must replace it for free.

Due to technical installation errors, defects in suspended ceilings such as moving away from the baguette wall and partial detachment of the edges of the canvas near the walls are possible.

Partial peeling of the edges of the stretch ceiling canvas against the wall is a marriage of calculations and installation, it should be eliminated by the organization involved

Even in the case when the baguette leaves due to flooding due to excess water mass, the company that installed the ceiling must replace it, as calculations were made unprofessionally. The edges of the web that partially detached near the walls are easy to fix in the system and on their own if the warranty period has expired.

Detaching the harpoon from the film is a factory defect. This defect is easily fixed independently or with the help of specialists..

Rules for the operation of suspended ceilings

Stretch ceilings are easy to install and operate, beautiful and elegant, do not require special attention and care. On average, various manufacturers guarantee their service life of at least fifteen years, but the experience of Western European countries confirms that with careful handling and careful care, stretch ceiling systems can also last thirty years.