How to insulate a wooden house

It is known for certain – more than 40% of energy resources are spent by mankind on cooling and heating. This indicates that the demand for thermal insulation materials is quite high. Their use not only contributes to the creation of comfortable conditions in the premises of the timber, but also protects parts of the house from temperature extremes, thereby increasing the life of building structures. That is why the question of how to insulate a wooden house remains very relevant today.

Types of insulation for a wooden house

Houses made of timber are in demand due to the advantages that they conceal in themselves. The natural atmosphere prevailing in a wooden house gives comfort and warm positive energy. But this does not mean that such a house does not need insulation.

The best option for insulation for a house made of wood is mineral wool. It is believed that the highest quality thermal insulation materials are URSA, ROCKWOOL and ISOVER. The insulators of the listed brands have excellent thermal insulation characteristics, low thermal conductivity and record low hygroscopicity. The raw material in this case is an especially strong basalt rock..

Mineral wool materials are recognized as one of the best helpers to protect a wooden dwelling from adverse weather conditions. Why? Minvata is a non-combustible material that is indifferent to the effects of mold, fungi and insects, not containing toxic substances and contributing to the release of vapors into the environment.

Professionals involved in the construction of houses from timber and, accordingly, their insulation, are advised to pay attention to the following materials:

Insulate inside or out?

This question, perhaps, worries everyone who ponders the problem of how to properly insulate a wooden house. Insulation from the outside increases the thermal insulation of the walls, without reducing the living space. The walls in this case are sheathed with a film, on top of which a heat insulator is laid. It is better to stagger so that the joints of the layers do not match.

Warming from the inside is undertaken if plasterboard finishing is planned. The frame can be made of metal profiles, under which a layer of waterproofing is laid. After laying and securing the mineral wool with screws, you should close it with a film. Only then do they begin to install drywall sheets.

The success of the campaign called “How to Insulate a House from a Bar” depends on the correct location of the insulation. If dense insulation materials that do not allow condensation to be placed indoors, and porous – outside, then creating wonderful conditions for maintaining heat will not be difficult.

It is important!
The air gap between the insulation and the wall is necessary in order to protect the wooden house from the destructive effects of fungi and mold.

It is possible to clad houses from timber with ceramic or concrete blocks, stone, brick. The insulation is laid between the lining and the wall..

The insulation design consists of the following components: vapor insulator, frame, heat insulator, the second layer of the frame, lining. 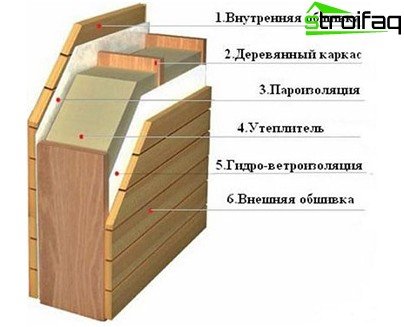 Warming of a house from a bar begins with a vapor barrier. It can be a plastic film, aluminum foil or even roofing material. The task of the vapor barrier is to provide ventilation of the facade under a film coating. If the house is built of round logs, this is not a problem, but if the walls have a smooth surface, then you need to fill them with narrow vertical slats 2.5 cm thick with a step of 1 meter. Then, a vapor barrier layer is laid on the entire surface. Top and bottom between the rails holes are made with a diameter of 20 mm. The ventilated layer between the vapor insulator and the wall will not allow moisture to accumulate under the film, which means that it will help to prevent the appearance of putrefactive foci on wooden walls.

It is important!
The places where the vapor barrier is fastened (with nails or staples) are sealed with tape.

The frame is made of boards with a width of 100 mm and a thickness of 50 mm. Boards are stuffed vertically on the wall, on the edge, so that the distance between them is 2 cm less than the width of the insulation.
Thin boards should not be used: they are useful for attaching the cladding.

Mineral wool plates are laid between the boards of the frame. Make sure there are no gaps between them. Two layers of mineral wool 50 mm thick each must be laid so that the joints of the first layer are in contact with the middle of the plates of the second.

You need to know!
Mineral wool slabs are quite rigid and elastic, have a density of 80-120 kg / m3, which allows them to be held without sliding, without additional fastening between the boards.

On top of the insulator you need to lay waterproofing material. The film should pass steam freely, but retain water. The waterproofing is applied over the heat insulator and is nailed to the frame with nails or staples. For joining the film, leave 10 cm, sealing the joints with self-adhesive.

The second layer of the frame

On boards of a frame with thermal insulation, 3 cm thick and 50 mm wide rails are packed. This is necessary for the free circulation of air between the outer skin and the vapor barrier and drying of the condensate. From below, the formed space must be covered with a thick metal mesh to protect from insects and rodents.

Sheathing – plastic or wooden, performs mainly a decorative function. What material is best to use is a matter of style inherent in your home as a whole. Please note that an increase in wall thickness during insulation by 10-20 cm will deepen the doors and windows, so you need to consider how the insulation system will be closed from the side of the window openings – siding, platbands or new window sills.

Hand-made warming of a house from a bar

In general, it is advisable to solve the problem of insulation at the stage of designing a house – this will help to carefully consider the entire course of work and save a significant amount of money. Consider the main stages of warming.

Eliminate heat loss through the foundation

Often, when warming a wooden house, the thermal insulation of the foundation is not taken into account. But if this is not done, the floors in the house will be very cold. The foundation is insulated before the construction of floors and walls. 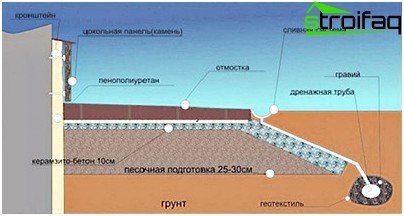 The easiest way is to fill the base to the level of the future insulated floor with earth. The method is applied before the walls are erected..
Expanded clay is no less popular – an inexpensive thermal insulation material, for the use of which it is necessary to build a formwork.

You need to know!
Formwork can be made from slate or second-rate boards. The cracks between the floor and expanded clay are covered with mineral wool.

Expanded polystyrene is also a reliable way of warming. The plates are glued to the mastic on top of the waterproofing layer. The thickness of the plates depends on the depth of the base, soil properties, general climatic conditions, the presence of a basement. Expanded polystyrene must be brought to the floor level of the first floor.

Warm floor in any season

The technology of floor insulation will depend on the design. If the floor is earthen, then a layer of foam concrete or granulated slag covered with a screed is suitable as a heat insulator. If the floor is a structure mounted on supports, then when mounting the lag from below, it is possible to hem them with a draft board on which a layer of heat insulator is laid similar to the height of the lag.

This can be a polyurethane or a layer of mineral wool, laid without gaps. Layer thickness – not less than 100 mm. A waterproofing film is applied over the lag and the heat insulator, and then the floor bars. Between floors, the floors are insulated in the same way..

Wall insulation was described in detail when analyzing the design of the thermal insulation. Recall that the layers should be like this (from inside to outside):

How to insulate the ceiling

The insulation of the ceiling is no different from the thermal insulation of the floor, only instead of the logs, beams are used that cover the house. A heat insulator is placed between them, surrounded by a steam bottom and a hydro insulator from above. The structure is sheathed with boards on which drywall will be attached – the basis of the floor of the second floor.

It should be known!
If the attic is not intended, then planking is not necessary..

Do not forget about the attic

It is important to remember the sequence of stacked layers. Part of the insulation must coincide with the insulation of the roof, and the walls and ceiling of the attic must be insulated according to the principle described above. The only one layer of “sandwich” will not coincide with the previously described scheme. The waterproofing must be hemmed under the entire surface of the roof, which means that on horizontal and vertical surfaces (ceiling and walls), additional waterproofing is not required.

Be sure to insulate the roof

That’s where you definitely should not save. The roof “works” in particularly difficult conditions, it is affected by precipitation, temperature changes, physical stress from the wind, so when choosing a material, first think about quality, and then about cost.
Insulation of the roof of a wooden house depends on the intended use of the attic. The attic will not be a habitable place? Then the inside of the roof can not be insulated, only thermal insulation of attic floors is thought out. But if a residential attic is planned, then the insulation of the roof becomes simply extremely necessary. 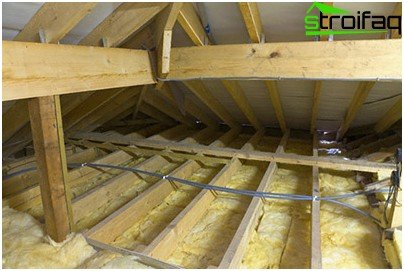 Before starting work, inspect the roof parts for moisture, rot and damage. The wooden structure is treated with an antiseptic, damaged parts are replaced.

If the wooden house is in operation and has a flat roof, it is possible to insulate both inside and out. Although it may turn out that for a comfortable stay, external insulation will be quite enough.
To work, you will need basalt mineral wool – a durable material that not only protects against mechanical stress, but also has high fireproof characteristics, which is very important for wooden houses. Insulation of a flat roof is carried out in the following sequence:

The owners of summer cottages and country houses, choosing the best option of insulation, should familiarize themselves with an interesting, comprehensive way to improve the thermal insulation qualities of a wooden house by installing facade thermal panels and changing the dimensions of windows:

Now you know how to properly insulate a wooden house, which means that winter cold will not be scary: in a house made of timber it will be cozy and very warm.