How to plaster the ceiling

The ceiling is striking – this is a fact. Not always, of course, in the first place, but it rushes. When it is executed as evenly as possible, the room looks neat and presentable – even if you do not purposefully look up. Let’s talk about how to plaster the ceiling – after all, this is one of the most important stages in creating beauty and comfort in the house. Proper execution of work will allow you to forget about repairing surfaces above your head for more than one year.

For the best adhesion of the solution to the base, it is necessary to properly prepare the surface. First of all – to “remove” the old coating to the concrete. The base – the “bare” concrete ceiling – should remain completely clean after all manipulations.

Flush or not flush?

Do not “think” to wash off whitewash or putty! Thus, you will only spread white hard-to-remove dirt on the surface. Subsequently, the primer of the “concrete contact” type will stick to it either very poorly or not at all.

“Flushing” can be called a logical solution for the ceiling only if you plan only a slight redecoration – its simple “trimming” and updating; without thick layers of finishing materials. Otherwise, the plaster will have nothing left but to soak and pull off the rest of the putty. Moving away from the base, the plaster “zakuhtit”. 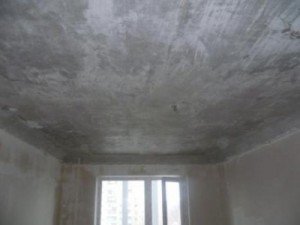 Type of ceiling prepared for plastering

The primer will provide adhesion

After thorough cleaning of the ceiling, you can proceed to priming. The primer of the Betokontakt type incorporates special grains that form a surface roughness when dried – due to this, the plaster adheres to the surface much better. We leave the primed ceiling alone until the next day – the entire area should thoroughly dry.

Try not to overdo it with opening windows and drafts – the whole process should proceed as naturally as possible.

When using a two-meter device in the “standard” room, no more than three holes will be required – at the opposite walls and in the center.

The check should be carried out not only along the length and width, but also along the diagonal;

Attention! For the tracks, use the same plaster that will be subsequently plastered on the ceiling..

Important! According to some sources, all work after the installation of beacons should be stopped for 24 hours or more – in order to achieve absolute polymerization of the stucco mortar. This step is really justified – the risk of displacement and / or damage to the beacons is reduced. But on the other hand, the joints of fresh and hardened putties will be doomed to insufficient adhesion. This will adversely affect the strength of the entire ceiling area. The most reasonable solution in this situation is to plaster on relatively fresh lighthouses, while being as careful as possible.

Plastered ceiling in the kitchen

Do I need a reinforcement mesh?

It all depends on the thickness of the plaster layer. If it is 10-15 mm, then you can do without a mesh, limiting it to gluing it in places of seams between plates (rusts).

If the thickness of the plaster exceeds 20-25 mm, it is better not to rely on “maybe”.

Experts unanimously say that gypsum mixture is the most rational option for solving such a difficult task as plastering the ceiling with your own hands. Consider the solution preparation algorithm using the example of a Knauf gypsum Rotband mix:

How to plaster the ceiling – the finish line

Apply the solution with a metal spatula or a grater previously moistened with water: the plaster will not stick to the tools. The layer thickness should slightly exceed the distance “beacons – the base of the ceiling”. Press the grater firmly to the ceiling so that there are no sinks or voids. So, the first layer is applied.

Now take a roll of mesh, unwind it a little and place it over your head. Using a grater or a spatula, press the mesh to the applied layer; at the same time, continue to unwind (along the beacons) the roll. Note! Using galvanized metal mesh for reinforcement, make significant efforts – “push” the composition through the cells.

After fixing the mesh, apply a second coat. Remove excess plaster as a rule (drag it along the beacons). The final stage is the removal of the beacon plates (aluminum can be left without touching). Seal the furrows with the remaining solution. The subsequent finishing work should begin after the plaster has completely dried (3-14 days).

Accuracy and strict adherence to instructions is an absolute key to success. It is worth noting that plastering the ceiling is not an easy task. If you still have doubts about your own competence, don’t take risks: contact experienced specialists.