Organization of a reliable system of protective electrical safety is one of the main conditions that prevent harm to users of electrical installations. It will provide protection not only to humans, but also to devices. Properly designed and installed protective grounding will prevent the negative impact of a wide range of unpredictably occurring circulating currents, eliminate their short circuit on the cases. As a result, the probability of traumatic injuries and the failure of complex technical devices will be excluded.

The purpose of protective grounding is to create electrical connections to earth of non-conductive metal elements that are at risk of voltage. The cause of the undesirable occurrence of voltage can be lightning discharges, short circuit to the housing, carrying out potential, induction that appears under the influence of nearby current-carrying devices or their parts and a number of other situations. The connection can be made with soil or its equivalent, such as sea or river water, coal in the quarry, other natural or artificially created objects with similar properties.

The work of the protective grounding system is to reduce the parameters of step voltage and touch, in bringing them to safe values. As a result of a competent device of the grounding system: 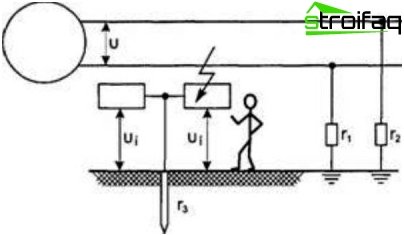 Based on the reduction of values ​​or on the equalization of potentials of the grounded electrical equipment, the principle of protective grounding helps to reduce the voltage of the housing relative to the object used for grounding, which is often used as soil. Due to this, the current passing through the user’s body and the voltage of touch (step) will reach values ​​that are absolutely safe for humans and technology.

The grounding function will be fully implemented if the earth fault current indicators do not increase due to a decrease in the grounding resistance. This condition is fully consistent with an isolated neutral network – with a generator or transformer device not connected to the grounding system or connected to it through a high resistance of various measuring, signaling, protective devices.

How are the calculations made?

Fundamentally, the calculation of protective grounding consists in accurately determining the main parameters. They are required to create a circuit that forms the most safe step and touch voltages that appear at the moment of phase closure to the housing. Based on the calculated values ​​that are within the permissible limits, the number and dimensions of grounding conductors are calculated, the order of placement of single elements is planned.

By origin, grounding conductors are divided into two categories, when making calculations, it is necessary to take into account their specific differences and features: 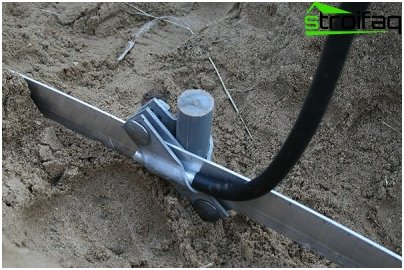 In addition to soil and water, the category of natural grounding conductors includes metal pipes for water and other utilities laid in a trench way. Pipelines with combustible and explosive substances, highways constructed with the partial use of PVC pipes and parts cannot be used as grounding conductors of natural origin. Designed to provide trouble-free functionality of electrical equipment in emergency and normal conditions, working and protective grounding, eliminating the likelihood of damage, are mainly installed in the ground.

To perform the calculations, the following data is required:

Important. When placing a protective grounding system in two soil layers, data on the resistivity of each of them is needed, accurate data on the power of the upper layer will be needed.

Mainly protective grounding and zeroing of electrical installations are calculated for cases of installation of elements of the grounding system in a homogeneous soil. However, calculation methods have now been developed and are being applied with the arrangement of grounding conductors in a heterogeneous earth.

Independent of the calculation method, a parameter common to all schemes is the required resistance, determined in accordance with the regulations of PES.

For electrical equipment with voltage up to 1 kV, the calculation of the resistance of the grounding element included in the protective grounding system with insulated neutral (type IT) is performed in accordance with the condition:

In this inequality, the variable Rz is the resistance value of the grounding device (expressed in Ohms), a constant value is Upr.add. – contact voltage parameter (50 V), Iz – total value of earth fault, expressed in A.

According to regulatory requirements, the value of Rz varies from 4 ohms to 10 ohms (there are no special requirements for the lower limit value, the upper one is the maximum permissible parameter), provided that the power of the mains supply and transformers and generators connected in parallel is not higher than 100 kVA.

To organize protective grounding of installations with a higher voltage, other values ​​are used in the calculations:

Note. Minimum resistance values ​​for ground loops are preferred. The lower its value, the more effective will be the movement of current through objects with the least resistance.

In multi-apartment buildings, circuit breakers are installed to protect residents from damage;.

In autonomous housing and in summer cottages, due to the lack of technical ability to install disconnecting automation, a protective grounding device is required, which can be done by contacting electricians, or made with your own hands. 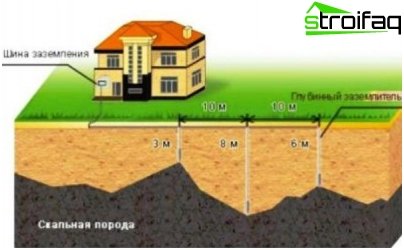 Elements of the circuit, which does not include a deep ground electrode, can be installed in a row or arranged in the form of some kind of geometric figure. The shape of the contour depends on the features of the site. This method is applicable when the length of the ground lines up to 3 meters.

Note. Often, a different number of grounding elements is used to ground equal areas of land, since the resistivity of the soil is influenced by the specific resistance of the soil. 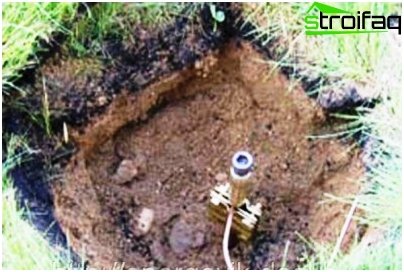 Connection with bolts is permissible only in case of installation of elements with a corrosion-resistant coating; The ground wire is connected to the black metal circuit by welding, followed by fastening with a bolt

This is a simple, protective grounding circuit available for independent implementation with an isosceles triangle contour. This electrical protection system is located a meter from the lower border of the base or wall. 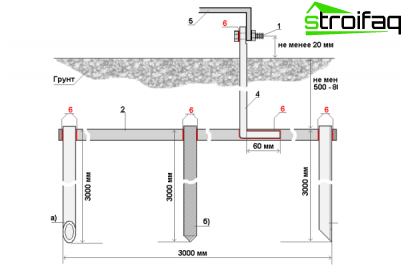 Note. It is much easier to hammer in objects with pointed ends. Sharpen the material you are going to hammer with a grinder.

As a material for vertical grounding, a metal pipe with a diameter of 50 mm, a steel bar of 10 mm, a corner with a side of 50 mm are suitable. It will take three segments three meters long. The horizontal grounding element can be made of nine meters of steel strip 4 mm thick, 40 mm wide. 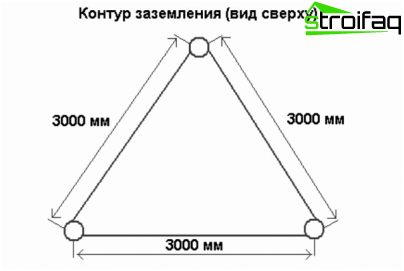 The installed circuit will successfully perform the assignment of protective resistance if it is connected to a steel water pipe laid in the ground, to metal casing pipes of water wells, to other reinforced concrete and metal structures. After installing protective grounding, all trenches and excavations must be filled with homogeneous soil without the inclusion of crushed stone and construction debris.

Having got an idea of ​​what is called protective grounding, having learned about the ways of constructing an electrical protective system, you can safely proceed with self-assembly. Do not forget about measuring the resistance value after installation. If there are no corresponding devices and skills, it is required to call electricians.