Lightweight strong vapor-permeable artificial stone actively displaces traditional building materials from the market. Economic gas concrete, gas silicate and foam concrete products are distinguished by an extensive list of advantages, the weight of which reduces several disadvantages. This is not a very presentable appearance and shrinkage caused by drying and carbonization. The disadvantages of this type of building materials can easily be eliminated by those who know how to plaster foam blocks, walls and ceilings, made of materials with a similar structure. Proper execution of plastering work will also ensure durability and durability of the finish.

Why it is recommended to plaster?

Plaster is the most appropriate option for finishing interior surfaces and facade cladding of foam concrete and aerated concrete building structures. Of all the finishing materials presented to the consumer today, only correctly selected and applied plaster can optimize the technical, insulating and operational characteristics of building materials made of foamed concrete. The advantages of the joint work of plaster with this category of materials include:

Plastering is the best option for protecting walls from foam concrete and aerated concrete blocks, preserving the best qualities of building materials

Plaster is a vapor-permeable material, due to which finishing moisture will not remain on the surface of foam concrete blocks or aerated concrete walls. This means that there will be no resettlement of fungi and bacterial colonies, due to the vital activity of which the building material is prematurely destroyed. It is best if the walls are equipped with plaster on both sides, so they can “breathe”.

If something prevents the steam exit, then in addition to the rapid wear of foam concrete and aerated concrete blocks, it will be necessary to often repair the plastered surface. Moisture accumulated under the finish after several freezing and thawing cycles can cause the appearance of cracks of various sizes and a violation of the integrity of the plaster layer. “Double-sided” plaster will not be an obstacle for free gas exchange, that is, for the withdrawal of gaseous domestic negative outside and for fresh air to enter the premises.

The specifics of plastering porous concrete

The porous structure of building blocks made of foamed concrete is the basis of the whole set of qualities that attract builders and future owners of residential buildings. Air bubbles contained in a kind of cells, perform the function of the most effective insulator. This also explains the light weight of materials, which reduces construction costs and labor costs. But it is precisely these advantages that create complications when applying plaster, since the adhesion force between the usual plaster mix and the concrete surface is not always sufficient for the stable stability of the finishing layer.

Initially, foam concrete products were produced as insulation, so the quality of their surface and the ability to work together with finishing materials was not at the forefront. Much later, builders, who drew attention to the technological advantages of installing large blocks, their strength and light weight, began to use foam blocks as a material for the construction of partitions, and later for the construction of load-bearing structures. This is where the finishing problem appeared, the question arose: “How to plaster the foam block?” The smooth surface of the foam concrete products “didn’t want to hold” most types of putty and ordinary plaster. 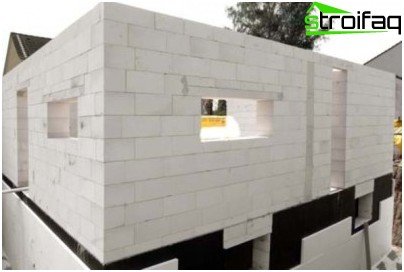 At the disposal of builders there are now two types of foam concrete blocks, for the production of which two different technologies are used. On the basis of which the building material featured on the market under the generalized name “foam concrete block” has a number of differences.

For the decoration of walls made of foam concrete blocks, the assortment of building stores has special compositions with optimized properties, designed specifically for application to a material with a cellular structure. Ready mixes are characterized by high adhesion, elasticity, improved vapor permeability. These are gypsum-based compounds, for the preparation of which you just need to follow the manufacturer’s recommendations. 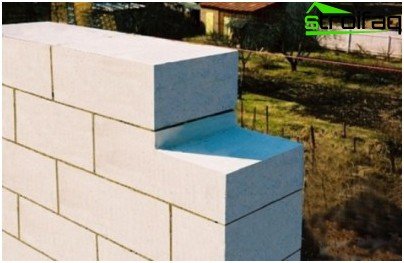 Foam blocks made using sawing technology are easier and faster to plaster.

How to plaster foam blocks correctly

The inner layer of the stucco “pie” should be thicker than the outer. That is, the first layer of 2 cm is superimposed on the ground, then the second layer goes, the thickness of which does not exceed 1 cm. This arrangement of layers and size ratio guarantees an increasing distribution of thermal conductivity, moreover, moisture goes beyond the structure, without condensing on the surface of the material. With an increase in the finish layer, the proportions of 2 to 1 are maintained. Moreover, the density of the outer layer should also be less than the density of the inner layer.

The metal mesh used to reinforce the plaster layer

It is important to remember: it is possible to plaster foam concrete blocks after 28 days after their release. During these 28 days, a set of material strengths occurs, associated with the likelihood of small cracks. They will not affect the strength parameters of foam concrete products, but can affect the quality of the plaster negatively..

Aerated concrete and foam concrete blocks treated with water-repellent impregnations practically lose the ability to capillary suction of ground water and moisture from flooded basements. The application of hydrophobizing agents on the surface of cellular concrete protects even against heavy slanting rain. Moreover, the hydrophobic coating that creates a very thin film does not affect the vapor permeability. It prevents the penetration of water into the thickness of the building structure, but does not interfere with the steam out.

To prepare the walls of foam concrete materials for applying plaster, it is recommended to choose primers containing hydrophobic substances. Special water-repellent impregnation can also cover the top layer of plaster. Moisture protection will eliminate the likelihood of cracks and defects on building materials, which in turn may cause cracking of the plaster.

How and how to plaster aerated concrete

Aerated concrete is a building material belonging to the family of cellular concrete. It has a structure similar to foam concrete, therefore, its decoration is associated with the same problems. True, the manufacturing process is somewhat different from the production of foam blocks. Products made of aerated concrete are subjected to vibrational loads, designed to accelerate the course of chemical reactions and hardening. Bubbles and irregularities that arise on the surface are cut with a thin string, then elements with a clear geometric shape are cut from the finished array. The manufacturing process is completed by heat treatment of blocks in autoclave systems and manual preparation of facade surfaces. 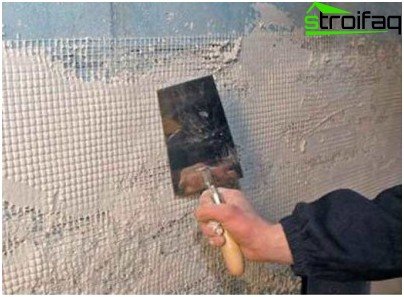 Those who want to learn how and how to plaster aerated concrete will benefit from information on the decoration of foam concrete blocks made by sawing. Any primer for foam concrete, gypsum plaster ready mix, the adhesion indicators of which may not be the highest, is suitable. Alkaline inert plaster recommended.

The special structure of foam concrete products dictates the use of specific finishing methods. A competent selection of composition for plaster and preliminary primer is required. Subject to the rules of plastering walls made of aerated concrete blocks or foam concrete elements, the protective and protective plaster layer will last a long time and look perfect.