Owners of old houses are often faced with such trouble as cracks in the walls. And in new homes, unfortunately, such a phenomenon is not uncommon. Most often this is associated with subsidence of the foundation and its subsequent damage. Only partial or complete strengthening of the foundation will help to solve the problem. We offer you our help to understand this issue more thoroughly..

There are several reasons for the destruction of the base of the building:

Ways to strengthen the foundation

Fortunately, ways to strengthen the foundation are in the interest of construction scientists, which creates new materials, technologies and equipment. But time-tested methods do not give up their positions.

The most popular way is to lay a new foundation along an existing one. Do-it-yourself strengthening of the foundation is usually carried out in this way.

“Podkop” at a corner of the house 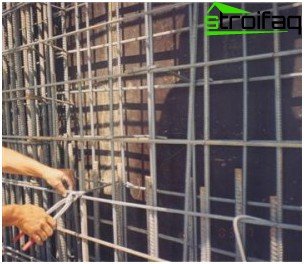 Important! Do not save on the frame. It is necessary to make it precisely from reinforcement, since its shape and composition of steel are ideally suited for this. Do not also significantly increase the size of the cell.

Important! Since such strengthening of the foundation of the house requires exposure of the old foundation, it is not recommended to stretch this process in time.

In most cases, “bulls” are enough. But if you want confidence that the foundation will not “float” again, build a reinforced concrete armo-belt around the entire perimeter of the building, which will connect the “bulls” into a single system:

Important! You can not expose the adjacent piece of the foundation until the screed of the previous one has completely dried. At this time, you can do work on the other side of the house.

In this way, the foundation of a brick house, a house made of reinforced concrete blocks or a wooden blockhouse can be strengthened not only in case of destruction of its foundation, but also during redevelopment, leading to an increase in the load on the foundation.

Important! All concrete work is recommended to be carried out at t from +5 to +30 degrees. It is also not recommended to begin strengthening the foundation during a period when prolonged rains are likely. Open foundations may be seriously affected by rainfall.

And here is a slightly modified diagram of this method:

Foundation drilling is one of the most modern methods. Strengthening the foundation of an old house using this technology cannot be carried out independently, and the prices for the work of specialists are high. The essence of the method is as follows: inclined wells with a diameter of up to 25 cm are drilled through the existing foundation from two sides.

The well depth in each case is determined separately. Drilling continues until solid soil is reached. Then, cement mortar is poured into the wells and the frame from the reinforcement is immersed. Thus, after the concrete has dried, the house relies on many reinforced concrete piles, the number of which is also calculated individually.

Scheme of reinforcement using the injection method and special equipment

When the strengthening of the foundation of a private house no longer makes sense, make its full or partial replacement. The process is long and very laborious. Its essence lies in the fact that after digging a trench along the foundation in a 1-2 meter section, the old foundation is completely removed, and in its place a new one is poured.

These are not all the methods used to strengthen the foundation. The main thing is to detect the destruction of the foundation in time and take measures to eliminate it. Otherwise, the process may become irreversible, and then it will be much easier to build a new house than to repair the old one. The first signs of impending problems are cracks in the supporting structures and the skew of the door and window openings. Once you have discovered any of these signs, you need to carefully examine the foundation and take measures to strengthen and reconstruct it.