Repair of the foundation of an old wooden house

With one glance at the old wooden structure, one can judge the need for repair work on its foundation. What signs indicate the presence of problems in the construction of the foundation of the house? This can be a skew of the structure, partial or complete subsidence of the building, the occurrence of cracks on the walls, on the basement and other deformations. The reason for such phenomena lies in seasonal temperature differences and soil heaving, as well as the destruction of the materials from which the foundation was made, under the influence of time. Depending on the severity of the situation, a decision is made on what kind of repair foundation of an old wooden house spend – partial or capital.

Foundation repair and its types

If the base of the wooden building went into the ground, while remaining intact, it is enough to carry out partial repair work. The construction of a slightly rotted foundation made of wood should be replaced or strengthened. At the same time, the building rises to the desired height, the base is built up with concrete blocks or bricks. 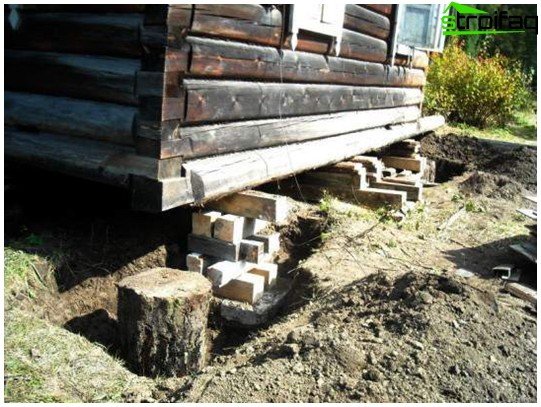 If it is made in the form of a strip foundation, then the option of partial dismantling and reinforcement along the entire perimeter is possible. Complete replacement is carried out in the case of a large degree of destruction..

Setting the house on special inserts

Estimation of distances for installation of a jack

If the structure is on a columnar foundation, then in most cases repair requires a complete replacement of the columns. At the same time, the building is carefully raised to the required height using jacks. A new, sturdy pillar is mounted on the reinforced concrete pad. In the same way, other columns are installed in the foundation structure.

1. Begin repair of the old foundation of the house, having damage around the perimeter, from digging a trench around its structure.

2. The surface of the foundation and walls are thoroughly cleaned of adhering dirt, as well as old plaster.

3. Having retreated a certain distance from the wall, fix the metal mesh with the help of anchors released from the foundation and base.

4. Having installed the formwork, pour concrete.

5. After sustaining the time required to harden the concrete mixture, the trenches fall asleep. In this case, each layer is subjected to reinforced compaction.

If only one separate section has undergone destruction, then on the sides of the foundation masonry from stones is increased to the required width. At the same time, they provide a connection between the masonry of the old and new designs. The sole of the foundation at the same time, as a rule, does not deepen. When revealing weakened sections of the base of the house, made of buty, butobeton, soil concrete, monolithic concrete and other materials, an expanded ferro-concrete clip is made. It is carefully bonded with end-to-end anchoring to existing masonry. This ensures the joint “work” of the newly constructed site with the old part of the foundation structure.

They also increase the bearing capacity of the old foundation, laying new foundations along weak areas on both sides, which absorb the load from the house’s gravity through metal or reinforced concrete beams passing through the basement. Anchoring of old and new designs is also mandatory to integrate their power.

Completely unusable structures must be replaced with new ones. Repair of the old foundation in this case is considered costly and ineffective. Work begins with a partial or complete unloading of the old, old-fashioned foundation.

At the same time, the task of the builders is to ensure the stability of the house and preservation of all the structures located above. There are several ways to do this, namely:

Also used are braces that support the basement wall, transferring the load from the wall at an angle to the ground. Before starting work on laying the foundation on the wall, control beacons are fixed, with the help of which possible deformations are easily tracked. After the preparatory work, they dig a pit. Laying the foundation is carried out with two-meter sections, between which breaks are made, ranging in size from 2 to 4 meters. The order of work is taken into account. 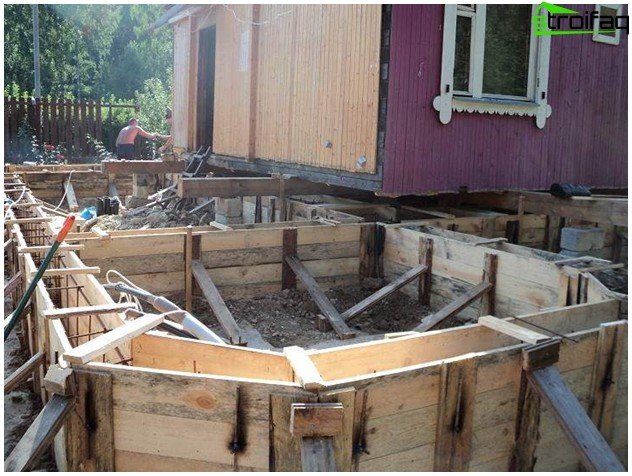 The construction of a new strip foundation

In wooden houses, the old foundations are usually completely unloaded, “hanging” the walls. Transverse reinforced concrete or steel beams are placed under them, which are laid in specially punched holes at a distance of 2.0–2.5 m. These beams are based on temporary supports previously installed by builders. Replace the old foundation with a new one, while its base is located lower.

The foundations of wooden houses erected on the territory of former peat mines, forested areas with loamy, clayey and woody soils, as a rule, experience uneven bulging. These processes begin on the south side of the structure, because the thawing of the soil there is faster. Therefore, in these places, the soil layers are very moist. Brick foundations, even reinforced ones, are covered with many cracks that divide the structure into separate blocks, which are intensively destroyed in the future.

Concrete foundations are also subject to destruction, but the processes are somewhat slower than in brick structures. First, cracks 20-30 cm long are formed in the vertical plane. Then there is a bulging of the destroyed foundation parts, and this may already threaten the safety of the whole house. The most reinforced concrete structures are considered, in which bulging is manifested to a lesser extent due to the reinforcement, which takes part of the stresses from the soil pressure.

An old columnar foundation, located in a saturated soil, is best replaced by a shallowly buried structure. The technology is divided into several steps:

1. removal of the plant layer;

2. digging a foundation pit to the required depth, if there is an old one, drain and strengthen it;

3. the device of the sand cushion;

4. laying of a reinforced concrete or concrete belt on which metal pipes are installed having a diameter of 100-250 mm;

5. laying on top of pipes of reinforced concrete or metal base plates, moreover, these elements are fastened with anchors. This prevents the upper plate from shifting..

Before building foundations in such complex soils, effective measures must be taken to drain from the house. These include the removal of cornices at 0.5 m, the device of gutters or trays, the device of ditches or drainage wells.

It often happens that it is necessary to repair not only worn-out foundations, but also those that are destroyed as a result of the mistakes of the builders. In any case, it’s significantly cheaper to build a solid new foundation than to rebuild a house..

When replacing the entire foundation or its individual parts, preliminary calculations must be performed, in which all old and new loads are taken into account. The physical and mechanical properties of local soils are also taken into account.