Building a house is a rather complicated, time-consuming and responsible process. The process of erecting a residential building includes several stages, at one of which the foundation for the house is mounted. This stage is one of the key, since the quality of the foundation laid determines the durability of the building, its protection from many internal and external factors, and the degree of safety. A competent approach to the construction of the foundation avoids many errors. In addition, one should take into account the fact that specialists identify several types of foundations, each of which has its own characteristics and is suitable for a particular soil, type of structure. Depending on the design features, it is customary to distinguish strip, pile, slab and columnar foundations. And now – a little about each of them.

Strip foundation – an option for a house with a basement

The strip foundation is ideally suited for the construction of residential buildings with heavy walls and slabs. That is why it is located around the entire perimeter of the outer walls and under other areas with an increased degree of load. In addition, the presence of an underground garage, cellar or basement is another argument in favor of a strip foundation. In a fairly general form, this type of foundation is a tape buried in the ground. They transmit the entire load from the load-bearing elements of the house: columns, walls. The support for the tapes is the foundation plates, the so-called distribution pillows. This design allows you to evenly and over a large area to distribute the existing load on the ground. Strip foundations are divided into types according to various criteria. So, according to execution, they are divided into:

Depending on the material used, it is customary to distinguish: 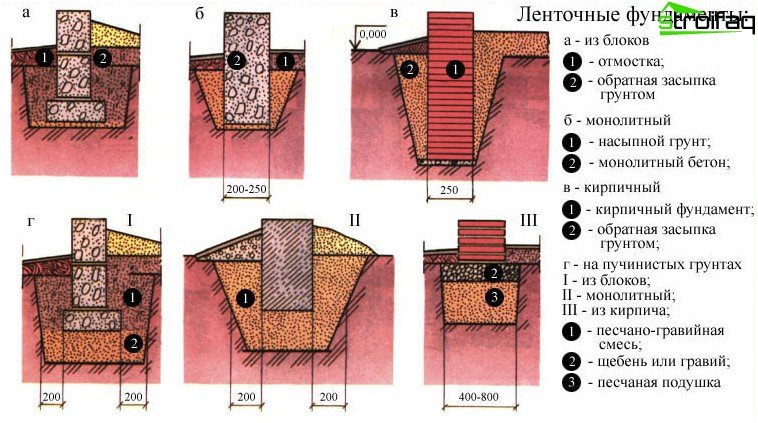 Types of strip foundations for the home

Pile foundation for building a house on soft soil

This type of foundation is suitable for soils that are distinguished by a weak bearing capacity with a rather significant load on it of a residential building. It is worth noting that the construction of the foundation of the house on stilts has gained wide popularity, thanks to not too large costs of materials and high performance. A pile foundation is a group of piles or individual piles that are joined together from above using a plate or beam.

The material for the manufacture of slabs and beams is concrete or reinforced concrete. This design ensures the stability and security of the future residential building in the case when at a sufficiently large depth there is weak soil: subsidence, loose sand. Pile foundations also vary in type of manufacture and in the material used. By type of manufacture can be distinguished:

Depending on the material used, pile foundations can be:

The slab foundation most often lies on the surface of the soil or is buried in it only slightly. It is a reinforced slab made of reinforced concrete, the thickness of which can be in the range of 0.3 m – 1 m. Reinforcement of the slab is carried out using reinforcement with a diameter of 12 mm – 25 mm. Before laying the slab, the surface is prepared from low-strength concrete or sand, which allows you to level the soil.

The slab foundation can be used on soft soils, as it contributes to the effective distribution of the load from the apartment building over the entire area of ​​the laid slab. In addition, it allows you to perceive horizontal and vertical deformations. Most often, this type of foundation is used to build houses above two floors. It is performed seamlessly and directly at the construction site. It is worth noting that the slab foundation is suitable for houses that have a complex structure. However, in this case, the slab should have expansion joints that cut the slab into separate parts.

Column foundation – the choice of economical

You can lay the foundation for a house with your own hands, stopping your choice on a columnar base. A pillar foundation is pillars submerged to a strictly defined depth in the ground, or concrete submerged in a pre-drilled well. The posts are connected from above using reinforced concrete beams. Columnar foundations are optimal for the construction of low houses of 1-2 floors. At the same time, the weight of materials used for construction should not be too large. Ideally, if the walls of the house are made of wood or other lightweight analogue. For frame objects, a columnar foundation is also suitable, but it should be borne in mind that it is used only on those soils that are not subjected to heaving. Depending on the type of execution, columnar foundations can be:

The material may serve:

General recommendations on how to lay the foundation for the home

When deciding how to lay the foundation of a house that will ensure its reliability and durability, it is first necessary to be guided by some general recommendations.

They are suitable for all types of foundations, being universal, and represent a list of factors that are recommended to pay attention to when choosing and laying the foundation.

Undoubtedly, when solving the problem of how to build the foundation for the house and not make mistakes, you need to know the possible flaws. A common mistake can be considered laying the foundation of the future home on an unconsolidated basis (soil). In addition, it will be erroneous not to take into account the lateral pressure force that the soil exerts on the foundation walls. Incorrect calculation of the bearing capacity of the soil can also lead to many negative consequences, as well as the lack of proper calculation of the supporting area of ​​the base of the house. Do not neglect the activities related to the drainage of water from the foundation.

The question of how to make the foundation for the house competently will allow a clear sequence of actions. So, there are five main stages of the foundation.

Then the plot is marked and the fertile soil layer is removed. After this procedure, a trench is excavated around the perimeter of the future home, the bottom of which is aligned with sand.

The structural diagram of the resulting foundation

Then, measures are taken to waterproof the foundation. To do this, 2 layers of roofing material are introduced into the foundation at the ground level, after which its laying continues to the required height. The underground part of the foundation can be pre-coated with hot bitumen..

After the waterproofing layer, bricks or blocks are laid, and ventilation holes are made in the opposite walls of the laid foundation, which will help to avoid unwanted moisture under the floor of the house.

Thus, given a number of nuances, it is not so difficult to lay the foundation of a house with your own hands..