A variety of technical devices for heating and cooling housing have long and firmly entered our lives. Radiators, heaters, air conditioners, underfloor heating, ionizers and humidifiers. There are many devices, but there are even more buttons that turn them on and regulate their work. Air conditioning can partially cope with the creation of a favorable microclimate, but its “horizons” are not enough: it will cool in the summer, but hardly warm in the winter. But the system “climate control” seems to be able to do everything. It is worth figuring out which is better, climate control or air conditioning? We will consider this issue from all sides: from both technical and financial.

What is a good air conditioner?

We will not talk about the power, energy efficiency and other characteristics of air conditioners – they are all different and depend on the manufacturer of the equipment, its class, cost, we will focus only on those parameters that clearly make it clear whether the air conditioner is good in terms of creating a favorable atmosphere in the house.

Good! Especially in the summer, when overboard + 30 + 35 ° С, the asphalt melts, and the water in the fountains boils. You can safely set a comfortable temperature for life and indulge in household chores. The optimal temperature, by the way, in such a situation on the street is 20-22 ° C. 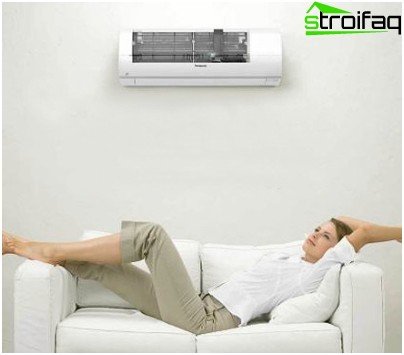 Air conditioning is a great way to cool off in the summer heat, but in winter it should not be turned on for heating rooms.

Inverter air conditioners, namely this type of split-systems are now sold with a bang, they can independently maintain the set temperature even if the temperature outside changes sharply during the day. That is, they almost do not require human participation, except perhaps turn it on and off.

In addition to cooling the rooms, the air conditioner can also heat them, however, it is unlikely that he will be able to cope with this mission in the frosty winter. Autumn and spring, no matter where you go.

In the off-season, air conditioners of the “warm-cold” type or, as they are also called, reversible air conditioners can replace a traditional oil heater. But there is one BUT! Such split systems work for heating only at positive temperatures on the street, although some models can cope with the mission assigned to them at -5 ° C. True, there are special thermal conditioners designed for efficient operation at a temperature of -25-30 ° C, but such a pleasure is not cheap.

To summarize. Air conditioners are able to both cool and heat. They cope with the first function perfectly, from the second to the frail “C grade” and even not all.

Smart climate control – what they love?

The main difference between an air conditioner and climate control is that it does not know how to think. Climate control knows how and how! It combines the work of a large number of household appliances: air conditioners, ionizers, dehumidifiers and humidifiers, supply and exhaust ventilation, radiators, floor heating systems. To control the operation of all this technology, one remote control will not be enough. Here you need a computer that can combine devices into one. Thanks to him, it will be possible to set a specific program that will maintain a favorable microclimate in the house, and the air temperature, the level of its moisture and ion saturation may vary during the day.

For example, during the day when nobody is at home, the system will maintain the optimum temperature of + 20 + 22 ° C, and at night, when everyone is sleeping and a large amount of fresh cool air is required, the temperature itself will drop to +18 ° C.

The climate control system copes with a lot of worries: it will bring coolness, it will heat in winter, and it will clean the air

For ease of management, maximum health benefits and energy savings, the operation of the climate control system can be “laid out” in a specific framework or scenario. For example, you can set individual parameters for each room of the house, choosing the most suitable option for a bedroom, kitchen, nursery, living room. You can “force” the system to independently choose heat sources and their power level. You can program for additional study and analysis of the meteorological situation. In general, the mass of opportunities. 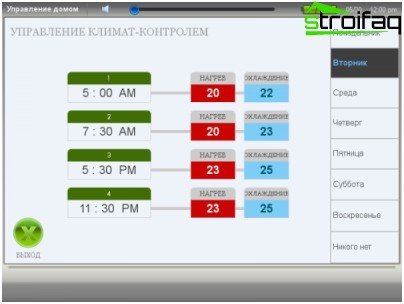 Climate control can be done on the touch screen. Here you can set various parameters of temperature, humidity, degree of ionization.

As you can see, climate control has many advantages that allow us to make an unambiguous conclusion: an intelligent system is much more efficient than a traditional air conditioner.

How to make a choice anyway – summarize

We’ll open all the cards at once: climate control is much more expensive than a home air conditioner. Although you most likely already know this. True, you are unlikely to realize the difference in money that distinguishes air conditioning and climate control from each other..

And now in more detail. The price of climate control is an ephemeral figure that cannot be recognized just like that. It consists of many constituent elements: from the conditions of the task set by the owner of the apartment, from the amount of equipment integrated into the system, from the remoteness of the devices from each other. However, approximate figures can still be called.

For example, temperature sensors cost from 200 to 500 euros per piece (they, by the way, may require several), a wall panel with a control panel – 500-700 euros, a relay module – from 200 to 1000 euros. Add here the cost of all equipment: air conditioners, ionizers, heaters, radiators, etc. Moreover, not every device can be freely integrated into the climate control system: most traditional devices do not have an integrated control module, and those that have it cost at least $ 600-700. Here is such arithmetic.

As for air conditioners, their price ranges from $ 100 to $ 700. In this regard, the advantage on the side of split systems!

Of course, replacing the air conditioner with climate control will be very expensive, because this amount includes devices, their connection, and installation of the system itself. However, the value in this case is determined not by the cost of equipment, but by the quality of life that you will receive after acquiring an intelligent climate control system.