Humidifier and how to use it

When humidifiers first appeared on the shelves of household appliances stores, people looked at them with apprehension and disbelief. Confused not so much the price of these miraculous units, but their purpose. No one understood, and even now there are few who have fully realized what an air humidifier is for. But this device is an extremely useful invention, which is simply vital in every city apartment, and in a private house it can be used.

What is a humidifier and how does it work?

In order to answer the question, why do you need an air humidifier, you need to figure out what kind of device it is and how it works.

The unit is a plastic case, inside which is a container with liquid. Evaporating in various ways, it stands out in the “atmosphere” of the house, thereby moisturizing it.

There are three types of humidifiers that differ from each other in the degree of saturation of air with moisture, the principle of the device and functionality. So, steam humidifiers work on the principle of heating water, which evaporates into the air. Ultrasonic devices use vibration, due to which the water does not evaporate, but is sprayed, creating a cloud of tiny drops of liquid, while traditional ones generate moist air from the water that flows onto the evaporation plates. The principles of operation of all devices are different, their performance is different, but the meaning of their work is exactly the same – they are all needed to saturate the air with vital moisture for a person.

But if everything is so simple, then how to use a humidifier? Is the instrument too complicated? In fact, the device is very simple, although some models look very impressive, for example, this one: 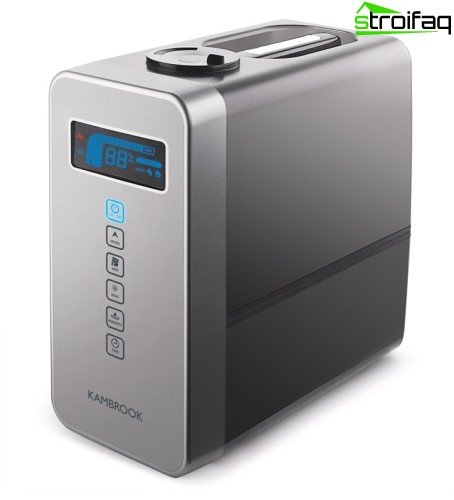 It is impossible to understand why there are so many buttons and where the water tank itself is located. Although there is the same instruction! 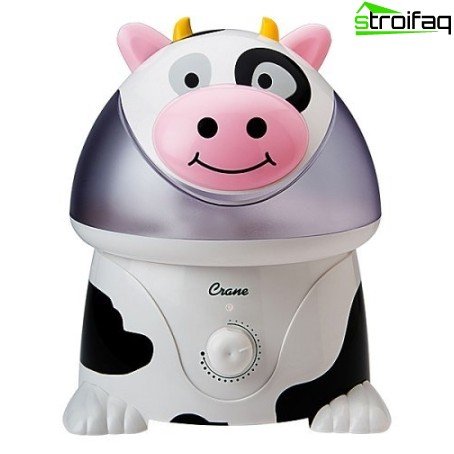 There are also humidifiers! Children like to be surrounded by interesting things.

Any humidifier has a special capacity, which can be either hidden inside it or located outside. It is in it that water is poured to the desired level. The device is connected to the network and configured (if possible). That’s all the difficulty!

What are humidifiers for??

We figured out the functionality, but the question is whether an air humidifier is needed in the house is still open, so right now we will find the answer to it.

Our apartments and houses are closed spaces, even too closed: plastic windows tightly blocking the access to fresh air, heating, “taking” the last drops of life-giving moisture from the apartment atmosphere, and even household appliances do their bit.

What about air conditioners? After all, they also drain the air. If you do not believe it, look at the water flowing from a pipe located on the outside of the wall. Where do you think it came from? As a result, our homes are completely devoid of not only humidified air, but also fresh.

The “drought” in the apartment is fraught with numerous health problems. This bronchitis, and asthma, and premature aging of the skin, and many other diseases associated with a lack of moisture. A striking example of how a person feels in an environment saturated with moisture is the feeling of freshness after rain. The air at this time is so fresh and clean that it even seems like breathing has become deeper. This happens because the atmosphere is literally penetrated by moisture and ions in an optimal combination for them. As a result, breathing becomes deep, oxygen arrives more actively, mood and well-being instantly improve. Dry air does not allow you to breathe fully, therefore, very often in a person’s apartment he suffocates, loses working capacity and appetite.

Wet air is especially important for newborns, because they have been in the water for nine months and it is difficult for them to adapt to a new environment for them. Lack of moisture can play a cruel joke with the baby’s parents – his skin may become covered with a rash, and his breathing will become superficial, which will eventually lead to hypoxia. Therefore, do not think for a long time which good humidifier and which bad, the main thing is that it is.

Moisture is no less important for female beauty. Its lack can cause premature aging of the skin, which begins very trite: first the skin becomes dry, then there is a feeling of tightness, and later the first wrinkles “appear”. Humidified air makes the skin supple, supple, vibrant.

But not only people need moisture, animals and plants also die without it, so humidifiers are relevant in greenhouses, conservatories, flower shops and pet stores. In addition, appliances are simply irreplaceable in apartments where parquet is lying on the floor, antique furniture is standing and expensive paintings are hanging, because wood needs constant replenishment of moisture from the outside.

Thus, the question that tormented many: “Why do you need a humidifier?” disappears by itself, because this device is not only multifunctional, but also very useful for the health of the whole family.