Flooded neighbors from above – what to do and who is to blame?

Flooded neighbors from above – what to do? The question is worrying, probably for all residents of multi-storey buildings. After all, such “floods” happen much more often than it might seem at first glance. The picture is painfully familiar to many: evening, you return from work, the memory of a large-scale, recently completed repair still glows (such “piquancy”, according to the well-known law of meanness, prefers to happen when your nest is already polished to a shine), look around at your leisurely glance and freeze in a silent scene – an impromptu shower from the ceiling, falling off wallpaper, swollen parquet.

Let’s try to identify the main aspects of your tactics of action in this situation. A competent approach and adequate behavior is half the battle..

With the adoption of valerian tablets. But seriously, then stop panic and soberly assess the situation. After all, the “flood” has already happened, and this cannot be changed either by hysteria or by a colossal scandal. But a nervous breakdown can be “earned”.

Be prudent, prudent. This will be the best start to Operation Y. Stock up with perseverance, patience and get ready to sacrifice a certain time period. If your neighbors have flooded you, you can especially not count on their unconditionally voluntary consent to say goodbye to the contents of your wallet.

Flood behavior during a flood

So, take a deep breath … and run to the “heroes of triumph” – it is necessary to stop the disaster, that is, turn off the water, turn off the taps, etc. Also, as soon as possible, turn off the power supply, turn off all devices.

It all depends on what exactly broke through. If this, for example, is a common riser, then in front of you is the ZhEU answer – the operational state of these should be regularly monitored by this organization.

But a shower due to a bursting battery or a damaged hose to the faucet means only one thing – the trial will be directly with the residents (owners) of the apartment.

Where to go if the neighbors flooded?

Having informed / warned the neighbors (do not prolong the pleasure) and prevented a possible short circuit by removing all household appliances and other electrical appliances from sockets, it is necessary to contact the organization serving the house, and also urgently call an on-call specialist. After all, situations are not ruled out when one can not cope with abundant water leak. 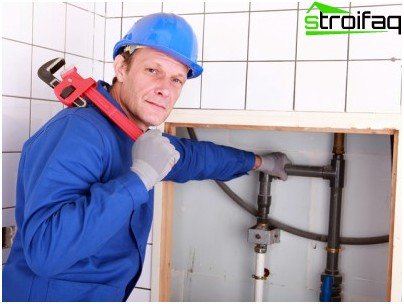 Well, the water is no longer whipping, and now the representatives of the management company should draw up an act indicating the cause of the water leakage (mixer failure, radiator breakdown, defective flexible connection of the washing machine), the alleged defendant (ZHEK or neighbors) and the amount of damage caused your repair, property.

Also, the act of flooding must necessarily contain the following items:

Attention! This act may not describe the resulting defects in furniture, wiring, appliances. Is this your case? Do not worry and stop pushing for these items. An independent appraiser (who should become your next official “guest”) during the evaluation will surely include in the next document “this paperwork” all the affected items.

In addition to representatives of the relevant structures, the act must be signed by the injured and (ideally) guilty party. And also representatives of a caring public are other neighbors. But if there are usually no problems with “other” ones, then the involuntary organizers of the “flood” do not always want to give autographs for documents that contribute to emptying their own pockets. And this, in principle, is understandable – in the refusal to recognize harmful involvement, a defensive reaction quite natural for any person is manifested.

As for this particular act, it should be drawn up on the day of the accident. It is clear that the esteemed commission in the person of the chief engineer, plumber and craftsman people are unusually busy and clearly have no irresistible desire to visit your wet monastery – but here it is necessary to decisively bring them “by the hand”. If your appeals are slurred and insecure, believe that “we will come tomorrow” turn into “wait until next week”.

Having closed the doors behind the ZHEKovskaya retinue, continue to “build” the line of defense. Invite more neighbors who are not involved in the incident to the house to enlist the support of as many witnesses as possible. “Destruction”, with them, take off the camera or camcorder. It would be nice if the neighbors agreed to be in the frame.

Flooded neighbors from above: flooded ceiling in the living room

Important! Date must be set on each image..

Such “home-made” evidence in some cases is very useful.

Meeting with an independent appraiser

The ZhES commission, as you know, was the first, but not the last. No later than 20 days after the accident, you should be visited by a more reputable company – independent appraisers / representatives of the LREO (the organization superior to the ZHEKs) to draw up a defective act.

Here, make sure that all apparent damages are made in the most detailed form. Remember: this is your money. This document should accurately reflect the quality of surface finishes and structures..

More boldly demonstrate to the commission all the consequences of the flood – walls, furniture (even its contents), household appliances. Insist on fixing every little thing. If, due to the fact that you were flooded by your neighbors, the telephone line, wiring, and expensive equipment have been damaged in the apartment, notify the authorized persons present about this. In the act, of course, the corresponding entry (mark) should appear.

In no case do not begin to eliminate the consequences (removal of wallpaper, removal of the laminate) before the visit of the appraisal company. And also do not rush to her “appeal”. Indeed, all the “beauty” sometimes climbs out after a couple of days: water has the ability to linger in the floor floors and form new smudges.

With a defective act, just like with the act of flooding, both sides are acquainted with the signature. The unwillingness of one of the parties to sign the document is fixed. The copy of the act is received by both the culprit and the victim. If the neighbors flooded the apartment not only to you, then this document should be provided to all forced participants in the process..

Do you think this is where the bureaucracy ends? We hasten to upset you – no.

Compilation of estimates for damages

At your request, they will be engaged in it in ZhES or ZhREO. To fulfill this paragraph, you can contact another office, but it must have legal rights.

All costs associated with paper tyagotomotin, you can safely include in a future lawsuit.

The specialists making up the estimate will perform their work on the basis of the defective act and current standards. The quality of building materials and their retail price should be taken into account. It will not be superfluous to provide your expenditure documents, checks, if you, of course, prudently cared for them.

What can I say, such litigations do not contribute to the strengthening of comradely relations between floors. I would like to recall that before going to court, you must be firmly convinced that the culprits are precisely neighbors in person. 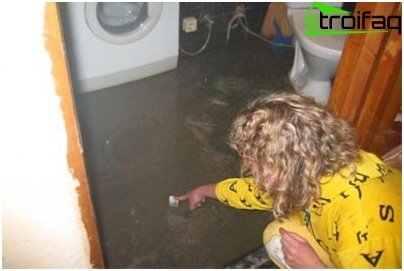 Breakthrough pipes in the bathroom

The list of cases in which ZhES is to blame:

So, your circumstances do not fall under any of the points? So the culprit is obvious. In the event that the neighbors from above flooded you through negligence or negligence, events can develop in this way:

Flooded neighbors – what to do?

It may happen that your apartment becomes the source of the “soul”. You flooded the neighbors – who is to blame in this case? Watching what happened. Possible causes of claims for house management are described above. All other “breakthroughs” entirely on your conscience. 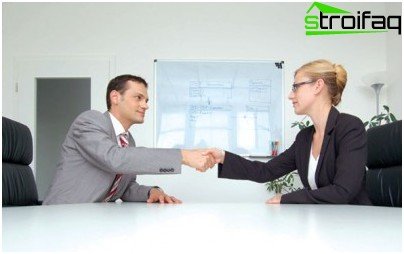 Strive for a peaceful resolution to the conflict: take care of human relationships

How to proceed? Visit your neighbors and try to negotiate a peace. Does not work? Do not “yawn” if you do not want to be tricked like sticky. Personally inspect the affected rooms, take a photo. You have every right to be present when drawing up acts of damage.

To summarize, it is worth noting that most floods can be prevented if you carefully consider the performance of systems in the apartment. Dry ceiling for you and your neighbors!