Successful operation of a roof covered with metal tile, its durability largely depend on the creation of an optimal temperature and humidity regime in the under-roof space. It is known that on the inner side of the roofing sometimes condensate forms, which, penetrating the insulation, can spoil its functional properties, and even penetrate into residential premises. In order to avoid such negative phenomena, waterproofing of the roof from a metal tile is carried out.

What is waterproofing of roofing for metal for??

Waterproofing a metal roof is necessary for several reasons. The main one is the protection of the roof from contact with water, since water destroys building materials, especially metal ones. Even when installing a new ceiling, it is necessary to carry out waterproofing, since moisture means not only water, but also condensate, which forms when the temperature drops. Therefore, the main tasks of roofing waterproofing for metal are:

Waterproofing is an important stage of a competent roofing device, which ensures reliable operation of the house for a long time.

Types of waterproofing for metal roofing

Materials for waterproofing are different and they are selected depending on the needs. For example, an inexpensive film may be suitable for temporary coverage, but for membrane protection, membrane waterproofing should be purchased. How do they differ?

The usual film for waterproofing consists of a base layer and polyethylene. It protects only internal ceilings and is most often used only as a temporary measure (for example, during repairs) to prevent rainfall from entering the house. Accordingly, the price of this type of material is very low..

If you need to install waterproofing once for many years, you should purchase a more expensive option – membrane waterproofing, which is characterized by practicality and durability. It consists of reinforced and absorbent layers that perfectly complement each other. The reinforced layer perfectly protects the surface from precipitation, and the absorbent layer, accordingly, absorbs moisture, preventing the formation of condensation and mold. Obviously, such material will have to spend a lot of money, but this will avoid problems with the roof in the future.

In roofs with cold attics for waterproofing under a metal tile, as a rule, glassine and roofing material are used. They provide good protection against wind and moisture, but if they are exposed to more tangible effects, they have a short service life. For a mansard roof, materials of a higher quality should be selected, such as, for example, film waterproofing based on polyethylene.

The film for waterproofing under the metal tile is of three types:

Before laying waterproofing material, it is necessary to correctly carry out preparatory roofing:

Waterproofing under a metal tile is mounted in one of two ways:

Installation of waterproofing step by step

The waterproofing under the metal tile is laid in such a way that air flows pass unhindered from the eaves of the roof to the roof ridge and freely pass through the ventilation holes installed at the highest points of the roof and through the ridge seals.

The film is laid in horizontal stripes from the cornice to the roofing ridge with an overlap (15 cm) and mounted on rafters or logs using a construction stapler or using stainless steel nails with a flat hat. Adhesive tape is used to isolate overlap sites. It is necessary to ensure that overlapping places fall on wooden structures. In addition, when laying the film, it is necessary to leave a sag of 2 cm between the rafters. This is done in order to avoid excessive tension or tearing of the film during sudden temperature changes..

It is not allowed to confuse the sides of the film. It is laid with the bright side of the edge tape to the roofing..

You need to know! There is a rule: as the film is rolled, so it is laid, it cannot be turned over, otherwise the waterproofing characteristics of the material are lost.

When using a classic or anti-condensation film, it is necessary to provide double-circuit ventilation, so in this case the height of the rafters should exceed the thickness of the insulation by 3-5 centimeters. If this condition is not met, then the distance blocks of 3×5 centimeters are clogged. This will create a ventilation space between the insulating material and the waterproofing.. 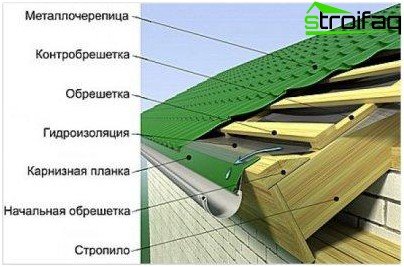 When the insulating film is in contact with the flooring, it loses its waterproofing properties, so under the roof slope it is necessary to provide a gap of 5 centimeters, and also take into account the requirements of air circulation when fixing the edges of the material along the bottom of the roof. On the ridge, the ventilation clearance should be at least 5 centimeters. If the design is equipped with a lower groove, the waterproofing film should reach it with an edge, if it is absent, it is desirable to perform the lower edge of the film, combining it with a roof groove. All openings for the circulation of air currents are designed so that biological organisms – birds, insects – cannot penetrate through them..

To attach the waterproofing layer to the roofing elements, rubber adhesive tape is used. At the junction of the slopes, the overlap of the film should be 15-20 centimeters. At the exit sections of the furnace and ventilation pipes, the film is laid on the walls of these elements with an overlap of 5 cm.

In areas where there are attic windows, a waterproofing film is attached, guided by the specific design of the window, since each manufacturer of attic windows provides its own solution for attaching waterproofing to their own products.