How to assemble and install a door frame

Currently, the idea of ​​visually expanding the space of a living room is extremely relevant, which is why many people refuse to install interior doors. It is worth noting that sooner or later, interior doors for one reason or another appear in these houses, decorating the interior and making the living room truly comfortable. The presence of doors allows you to retire if you wish or need, to isolate yourself from extraneous noise, to concentrate. In addition, the interior door is an independent aesthetic and functional element of the interior.

Often there are cases of replacing interior doors that do not “fit” into the new style decision of the premises. However, it is worth noting that the variety of doors of various shapes and sizes often creates a problem for the consumer, who is forced to change not only the door leaf, but also the door frame.

When deciding on how to make a door frame, it is necessary to take into account that there is a certain algorithm of actions. Following this algorithm, you can get an excellent result in the form of a door securely installed in the doorway. Particular attention before directly door frame assembly must be given its size and doorway dimensions. 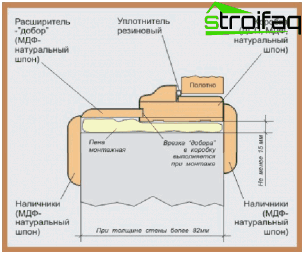 The layout of the door frame in the opening

The door frame consists of several elements. For its assembly, it is necessary to know the thickness of these elements, which can be different and depends on the thickness of the wall, in the opening of which the door is installed. Specialists recommend the following size ratios:

It should be noted that these sizes of door frames fully comply with the standards available in our country. However, for a number of foreign manufacturers, the indicated dimensions may slightly differ and be, for example, 80 mm, 100 mm, 125 mm, 145 mm, 185 mm, 205 mm.

A certain ratio of wall thickness and door frame thickness is necessary so that subsequently there are no difficulties with the installation of platbands. So, with a wall thickness greater than the thickness of the box, the latter will have to be “increased” with the help of connecting strips or special boards.

In addition, in this case, the door frame – the dimensions of which do not correspond to the thickness of the wall and the width of the doorway – can be replaced with a “draft” version. Usually a “rough” door frame is made of beams or planks, but it is also subject to additional adjustment to the wall thickness. 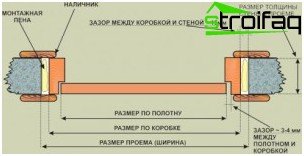 The process of assembling a door frame involves not only its presence, but also the presence of certain tools and devices, which include:

It is worth noting that the assembly of the door frame is not too complicated, however, you should clearly know the elements of the box and the method of assembly.

Three ways to assemble the bars

The door frame has 3 structural components:

There are several ways to connect these parts. Firstly, a stud joint, which involves sawing the spikes on the elements of the box, which subsequently need to be combined with the corresponding grooves on the opposite segment.

Using the existing chisel, the surfaces to be joined are trimmed and fixed, which is usually done using self-tapping screws. After the holes have been marked for them, the elements are again disassembled to install the hinges.

At the last stage of the door frame assembly, a hinge and a lintel beam are connected. The connection takes place at the previously designated holes. Experts recommend the final assembly phase on a flat and hard surface. It can be, for example, gender. All elements are connected by self-tapping screws, and then the box is carefully inspected for flaws. In their absence, you can proceed to install the door frame in the doorway.

Installing the door frame in the wall opening

The answer to the question of how to install the door frame in the opening also represents a certain algorithm of actions. So, before installation, the previous product should be completely dismantled, if any. After that, the surface of the doorway is prepared for subsequent installation of the box.

When installing the door frame directly into the opening in the wall, it is necessary to provide it with a reliable and fairly rigid base. To do this, narrow wooden planks are nailed at the corners of the assembled structure. The absence of a threshold is not a problem – the lower part of the opening can be fastened with a time bar of a suitable size.

To date, the installation of the door frame is most often carried out using foam. However, using its preliminary fixation with anchor bolts, an additional degree of reliability of the entire structure can be achieved. In turn, this will ensure a longer life of the interior door and its safety. In general, the process is as follows.

The assembled door frame is installed in the wall opening and fixed with wooden wedges. The installation of the box is recommended to be carried out at the construction level. Only after that it is attached to the wall. At least three pieces are drilled in vertically arranged structural beams, and corresponding recesses are made in the opening, after which the box is screwed to the wall.

It is worth paying attention to the fact that voids inevitably form between the installed door frame and the opening in the wall. They must be filled with mounting foam. You can protect the work surface from unwanted foam by using molar tape. The use of polyurethane foam requires special attention, since when it hardens, it tends to increase its volume up to 50%. This can lead to undesired deformation of the installed door frame..

You can avoid these negative consequences by using additional struts for the box. The role of the spacers can play wooden wedges, which are placed around the entire perimeter of the structure. After a day, the mounting foam completely hardens, and the spacers are removed along with the excess foam. After that, you can proceed with the installation of platbands.

Thus, the assembly and installation of the door frame is a fairly simple process, if you follow the correct sequence of actions and adhere to the above rules..

Installing the door frame in the wall opening