Today, grounding the bathroom has become a hot topic. Previously, no one did grounding in the house, because there was no such need. Over time, this issue became acute, as many metal objects and electrical devices appeared in each bathroom. The source of increased danger, by the way, is the bathtub itself, so grounding the bathtub is the key to your safety!

As a rule, modern electrical equipment has metal grooves for grounding. Grounding is a special protection that takes away electricity when a current appears on the device and then leads it to the ground. Each person at least one “hit” lightly on the body of electrical equipment. This often happens when working with a computer, a washing machine, or during hot water supply, when a breakdown of a ten of an old tank passes an electric current through the water.

All this happens, as you understand, because our electrical wiring in the apartment, and in particular in the bathroom, is designed without taking into account the relevant safety measures. But when the grounding is working, current breakdowns to the case are not felt. Grounding is also used for lightning protection purposes and to prevent negative consequences in the event of a lightning strike.

The relevance of security

Water is an excellent conductor of current, so electricity and water form a very dangerous combination for humans. Bathrooms for this reason are known as the most dangerous places in the home..

Where there are too many installation products and metal pipes in combination with high humidity conditions, in order to avoid accidents, it is necessary to adhere to the rules of electrical installation in the strictest way.

Metal objects that are not related to electricity (sinks, drain and water pipes, central hot water pipes, radiators, bathtubs) can lead to fatal consequences if a fuse or other fuse blows. Therefore, many are interested in how to make grounding in the bathroom and prevent the appearance of dangerous voltage on the metal components of the installation.

Previously, this problem was solved as follows: they connected the body of the bathtub with a plumbing or sewer riser. And today, doing it is more expensive! If the neighbors below, within the limits of their own apartment, exchange a steel water riser or a cast-iron sewer riser for a plastic installation, then this is by no means grounding the bathroom. This is an increase in the area of ​​the capacitor with all the consequences that follow from here..

In accordance with the rules of wiring, it is necessary that the bathtub is connected using a special connection to the grounding bus, which is located on the inlet distribution panel. Such a connection is called a grounding jumper. And you need to carry out this procedure in any bathroom, regardless of the electrical equipment located in the room. 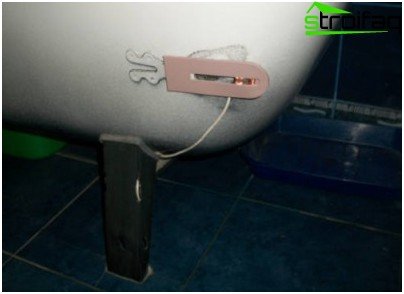 Grounding connection to the bathroom

Many apartments still have Soviet bathtubs. If the bath is an old model, then its grounding must be done as follows. Drill a hole in the foot of the bathtub and use a nut, bolt and washer to fix the grounding jumper.

The stranded wire is screwed to the foot of the bathroom, and on the other hand, to a special distributor, which also connects all other wires from metal objects in the room – pipes, drains, instrument housings. The distributor can be mounted on the bathroom wall in an arbitrary place. But in any case, it must be brought to the common grounding bus of the shield, which is located in the entrance.

If the apartment has a cast-iron bathtub

Modern metal bathtubs are made with a special ground lobe. And the grounding of the cast-iron bath looks like this. An earthen wire must be connected to the ground lug, the exposed section of the cable is pre-clamped between the washers using a nut with a bolt.

If the bathroom is equipped with electrical equipment such as a shower with instant heating of water or a water heater, it must also have a reliable grounding jumper made in the form of a connection of metal components – a body with grounded pipes.

The real trend of the 21st century is an acrylic bathtub. Such bathtubs are light and not too expensive. They, like other products, need grounding, despite the fact that acrylic is a dielectric. Firstly, acrylic is of two types – cast and extruded. The latter material does not hold well, and bathtubs made from it are necessarily equipped with a metal frame that requires grounding.

Secondly, the acrylic bath is grounded to remove static electricity: if you draw water into the bath from dielectric acrylic, you will still have a static element. And if the area of ​​the acrylic bath is not small, then it is completely capable of accumulating a large electric charge.

The stunning success today enjoys baths with electric filling – a jacuzzi. Any jacuzzi bath is powered by electricity. It must be connected to an electrical network that has a voltage of 220 ± 10% watts and a frequency of 50 hertz.

To connect the bath, a separate grounded outlet is required – a special outlet for bathrooms with lockable plastic shutters for the plug and a third plug, which plays the role of grounding. Such outlets do not allow water to splash inside and do not cause a short circuit, which is why they are called waterproof.

The outlet is usually installed on the wall – at a height of about 30 centimeters from the floor or 50 centimeters from the outer side of the jacuzzi in order to prevent water from entering. Lead-up is carried out by a separate wire in double insulation with a recommended section of 3 by 2.5 mm2.

To avoid damage to electrical equipment caused by sharp power surges, it is necessary to install an automatic machine designed for a load of 16 Amps, and an RCD, which has a differential value of 0.03 A. Installation of the machine and RCD is performed outside the bathroom.

Attention! Do not use the jacuzzi with a socket that does not have a ground connection. Also, the bath cannot be grounded through heating, sewer and plumbing equipment. It is strictly forbidden to carry out maintenance work when the bath is connected to the mains and to use the hot tub with a damaged power cord and faulty ground.

Electrical installation rules determine the size of the conductor, which should be used as a grounding jumper in different cases with the aim of minimizing the cost of electrical installation work. In the house, it is customary to use a rigid multicore cable, which has a cross section of 6 millimeters square, in green with yellow PVC insulation. This section is large enough to ensure electrical safety of the bathroom. If a bathtub with heating running water is connected using such a wire, then the connection must be made through an overcurrent protection device.

Most often, steel is chosen from the economy position for grounding electrodes, although it is allowed to use steel in a copper sheath or in general copper. The grounding cable must be at least 2 meters long. However, it should be remembered that the shorter the cable, the less likely it is to break. Therefore, it is worth carefully considering the moment of approaching the wiring output to electrical equipment. In addition, grounding conductors should not be coated, which affects electrical contact.

For aesthetic reasons, it is recommended to lay a jumper behind the panel screen of the bathtub, in the cabinet of the washbasin or under the floor boards. You can also lay the wire under the plaster or inside the voids of the wall as usual wiring.

There are different opinions regarding the need to ground the bathroom, however, if you are careful about your health and safety, it is better not to neglect this point. To avoid electric shock, which is caused by contact with the bath, you need to ground it. Indeed, in the case of force majeure, only grounding will save a person’s life.