Grounding and grounding of electrical installations

Our whole life is inseparable from all kinds of electrical appliances. The failure of any electrical equipment is a frequent and completely normal phenomenon, not a single device can work forever and without a single malfunction. Our task is to protect these electrical assistants from short circuits or overloads arising in the circuit, and ourselves from damage to the body by high voltage. In the first case, all kinds of protective devices come to the rescue, but grounding and grounding of electrical installations are used to protect a person. This is one of the most difficult parts of electrics, but we will try to figure out what is the difference between these works, and in what cases it is necessary to apply certain protective measures.

If automatic devices, plugs and other protective devices do not respond to a malfunction, and as a result a breakdown of the internal insulation is formed, an increased voltage appears on the metal casing of the installation. Touching such a device by a person can lead to muscle paralysis (with a current strength of 20-25 mA), which prevents independent separation from contact, arrhythmias, disturbances in blood flow (at 50-100 mA), and even death.

If parts of the electrical installation due to technical features must be energized, then they must be enclosed in accordance with generally accepted safety precautions, for example, special covers, barriers or mesh barriers. In order to prevent accidental electric shock when the insulation layers are damaged, protective grounding and grounding are used. To understand how grounding differs from grounding, you need to know what they are.

Often, beginning electricians do not quite understand what is the difference between grounding and grounding. Grounding is the connection of an electrical installation to earth in order to reduce touch voltage to a minimum. It applies only to networks with isolated neutral. As a result of the installation of grounding equipment, most of the current flowing to the housing must go along the grounding part, the resistance of which should be less than the rest of the circuit.

But this is not the only grounding function. Protective grounding of electrical installations also contributes to an increase in emergency fault current, no matter how contrary to its purpose. When using an earthing switch with a high resistance value, the fault current may be too small for the protective devices to operate, and the installation will remain energized in an emergency, posing a huge danger to humans and animals.

An earthing switch with conductors forms a grounding device, where, in fact, it is a conductor (a group of conductors) connecting the conductive parts of the units to the ground. By purpose, these devices are divided into the following groups:

All grounding conductors are divided into natural and artificial.

Important: for use as natural grounding, pipelines of flammable liquids and gases, pipes coated with anti-corrosion insulation, aluminum conductors and cable sheaths are not suitable. It is strictly forbidden to use water and heating pipes as grounding conductors in residential premises.

Depending on the connection scheme and the number of zero protective and working conductors, the following grounding systems for electrical installations can be distinguished:

The first letter in the name of the system indicates the type of grounding of the power source:

By the second letter, you can determine how the open conductive parts of the electrical installation are grounded:

The letters immediately after N, through a hyphen, indicate a way to create a protective PE and working N neutral conductors:

Such grounding of electrical installations is used in three-phase four-wire and single-phase two-wire networks, which prevail in old-style buildings. Unfortunately, this system, despite its simplicity and accessibility, does not allow to achieve a high level of electrical safety and is not used on newly constructed buildings..

For the modernization of old houses TN-C-S

Protective grounding of electrical installations of this type is mainly used in reconstructed networks, where the working and protective conductors are combined in the input device of the circuit. In other words, this system is used if it is planned to locate computer equipment or other telecommunications in an old building where TN-C type grounding is used, that is, to make the transition to the TN-S system. This relatively inexpensive circuit offers a high level of security..

Such a system is distinguished by the location of the zero and working conductors. Here they are laid separately, and the neutral protective conductor PE connects immediately all the conductive parts of the electrical installation. To avoid re-grounding, it is enough to arrange a transformer substation having a basic grounding. In addition, such a substation allows to achieve a minimum conductor length from the cable entry into the electrical installation to the grounding device. 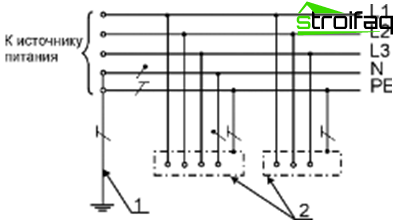 Characteristic differences of the IT system

The difference between this system is the isolation of the neutral source of the power supply from the ground or its grounding through devices with high resistance. This method allows you to minimize the leakage current to the casing or to the ground, so it is better to use it in buildings where stringent electrical safety requirements are set..

Zeroing is the connection of metal parts that are not energized, either to the grounded neutral of the lowering three-phase current source, or to the grounded terminal of the single-phase current generator. It is used to ensure that when an insulation breakdown and current gets on any non-conductive part of the device, a short circuit occurs, which leads to a quick trip of the circuit breaker, blowing of fuses or the reaction of other protection systems. It is mainly used in electrical installations with earthed neutral. 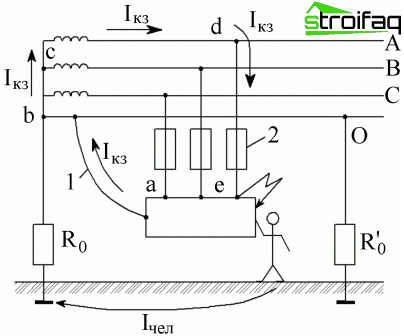 Schematic diagram of the zeroing of electrical installations

An additional installation of the RCD in the line will lead to its operation as a result of the difference in the current strengths in the phase and zero working wires. If both an RCD and a circuit breaker are installed, then a breakdown will lead to the operation of either both devices, or to the inclusion of a faster element.

Important: When installing the grounding, it must be taken into account that the short-circuit current must necessarily reach the melting value of the fuse insert or the circuit breaker, otherwise the free flow of the short-circuit current through the circuit will lead to voltage on all zeroed housings, and not just on the damaged section. Moreover, the value of this voltage will be equal to the product of the resistance of the zero conductor by the fault current, which means it is extremely dangerous for human life.

The serviceability of the neutral wire must be monitored very carefully. Its break leads to the appearance of voltage on all zeroed buildings, since they automatically turn out to be connected to the phase. That is why it is strictly forbidden to install in the neutral wire any protective equipment (circuit breakers or fuses) that form its gap when triggered.

Grounding and grounding: what is the difference?

The main difference between grounding and grounding is that when grounding, safety is ensured by a rapid decrease in voltage, and when grounding, by disconnecting a portion of the circuit in which a breakdown of current to the housing or any other part of the electrical installation occurs, while in the period between the short circuit and the termination power supply, there is a decrease in the potential of the electrical installation enclosure, otherwise an electric current discharge will pass through the human body. 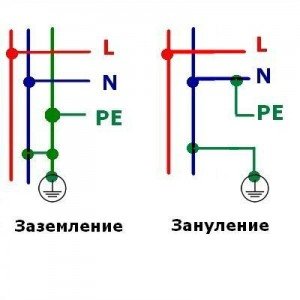 In all electrical installations where the neutral is isolated, protective earthing is necessarily carried out, and it should also be possible to quickly search for earth faults.

If the device has a grounded neutral, and its voltage is less than 1000 V, then only grounding can be used. When equipping such an electrical installation with a separating transformer, the secondary voltage must be no more than 380 V, lowering – no more than 42 V. At the same time, only one power receiver with a rated current of the protective device of no more than 15 A is allowed to be supplied from the separating transformer. In this case, grounding or grounding is prohibited secondary winding.

If the neutral of a three-phase network up to 1000 V is isolated, then such electrical installations must be protected against breakdown as a result of damage to the insulation between the transformer windings and the breakdown fuse, which is mounted in the neutral or phase from the low voltage side.

What and when to ground

Protective grounding and grounding of electrical installations must be carried out in the following cases:

In residential and public buildings, electrical appliances with a capacity of over 1300 watts are necessarily subject to grounding (grounding). If suspended ceilings are made of metal, then it is necessary to ground all metal cases of lighting fixtures. Bathtubs and shower trays made of metal should be connected to water pipes by metal conductors. This is done to equalize electrical potentials. To ground the cases of air conditioners, electric stoves and other electrical appliances whose power exceeds 1300 W, a separate conductor is used, connected to the neutral conductor of the power supply. Its cross section and the cross section of the phase wire laid from the switchboard must be equal. 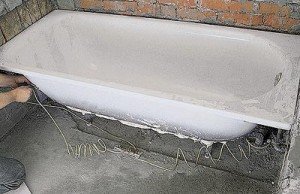 To equalize the electric potentials, the bath must be closed to water pipes

The grounding and grounding device is a very responsible job. The slightest error in the calculations or neglect of one seemingly insignificant requirement can lead to a great tragedy. Only people with the necessary knowledge and experience are required to carry out grounding.