The drill is a cutting tool with axial feed and rotational cutting movement. It is used to make holes in a solid material for drilling or enlarging an existing hole, as well as making recesses. How to choose a drill: drill for metal, drill for wood? Consider the recommendations of specialists.

All drills can be divided into two types: spiral and feather, each type has its advantages and weaknesses. Spiral drills are especially popular among consumers. They are made in the form of a cylinder rod, in which the working part is equipped with two spiral grooves, which serve to divert the chips. In this case, the slope of the grooves varies between 10-45 degrees. The working edge of the drill is made in the form of a conical shape. Twist drills can have tapered, cylindrical and hexagonal shanks.

This type of drill is characterized by a long service life and high reliability. Their disadvantages include only a relatively high cost.

Flat or feather drills have a simple design, in addition, their production is not very expensive, and they are resistant to distortion in operation. Perforated drills can be one-sided and two-sided: this difference is due to the shape of the sharpening of their cutting edges. In feather drills, the cutting part is equipped with two edges, which are located symmetrically to the axis of the drill, and when cutting form angles of 90, 75, 50 or 45 degrees. To measure the diameter of the drill, it is enough to know the width of the blade. Cutting ribs have a pen thickness that depends on the diameter of the entire drill.

At the intersection, the cutting ribs form a straight line called a web or transverse edge. The main disadvantage of feather drills is the lack of automatic chip removal during drilling, which leads to damage to the cutting edges and the need for frequent removal of the drill from the hole during drilling. In addition, when working, drill bits can lose direction, and when regrinding, their diameter decreases.

If you want to choose the right drill, it is important to consider cutting speed. By choosing the best combination of drill feed and rotational speed, you can achieve maximum productivity. Rotational speed represents the number of revolutions per minute. At its core, speed is the path that the outer points of the cutting edge of the drill pass, measured in meters per minute.

The optimal cutting speed during drilling is the speed due to which high productivity is achieved during long-term operation of the drill without regrinding (10 min – 1.5 hours). As practice shows, with a drill diameter of up to 2 cm it can work without regrinding for a quarter of an hour, if the diameter is in the range of 2.5-3.5 cm, then half an hour, and with a drill diameter of more than 4 cm it can work for an hour and a half without requiring regrinding.

The permissible cutting speed during drilling depends on the quality of the material of which the drill is made. Therefore, when choosing components, take the time to determine how high-quality material was used for its manufacture. If high speed steel is used, then the cutting speed may be higher than for drills made of carbon steel.

It is important to consider the drilling depth and drill diameter

Drilling depth is an important indicator when choosing drills. Remember that with increasing hole depth, the relevance of chip removal increases, and increasing friction leads to increased heating of the cutting edges. Therefore, for drilling shallow holes, the speed may be higher than for deep.

Depending on the purpose of the holes, their diameters may differ: for reamer, through blind, for thread, etc. It is interesting that in each of these cases, drills of different diameters are necessary to obtain the same hole diameter! It is important to note that when drilling, the drill contacts the edges of the hole and increases its size. There are averages of drill hole development. Therefore, if you need to get an extremely accurate hole diameter, it’s important choose a drill for metal or a drill for wood taking into account the size of the development.

Having considered the main features of the choice of drills, you can go to a hardware store in full confidence that you can pick up the right ones «ammunition» for your drill. 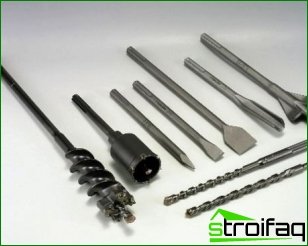